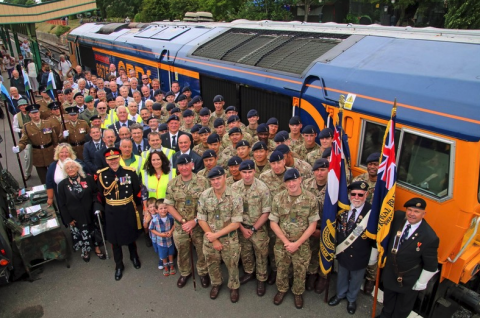 GB Railfreight has renamed one of its Class 66 locomotives ‘Royal Corps of Signals’, honouring one of the UK’s military regiments to mark Armed Forces Day in the UK.

The locomotive, which will fly the flag for both the British Army and the Royal Corps of Signals on routes across the UK, was named in a ceremony in the town of Swanage, close to the regiment’s headquarters. John Smith, Managing Director of GB Railfreight, and Major General John Crackett of the Royal Corps unveiled the new name together.

John Smith said: “We are delighted and hugely honoured that one of our locomotives will carry the name Royal Corps of Signals, and we cannot think of a more fitting tribute. Armed Forces Day is an opportunity to recognise the sacrifice of those who serve, and have served, in the UK forces and pay thanks.”

The Royal Corps of Signals has a long association with the town of Swanage, spanning more than three decades. In that time more than 5,000 soldiers have taken part in exercises that have helped improve the infrastructure of The Swanage Railway, a popular heritage line, and GB Railfreight said it was ‘proud’ to recognise the contribute of these soldiers and the role they play in the efficient operation of the UK’s rail network.