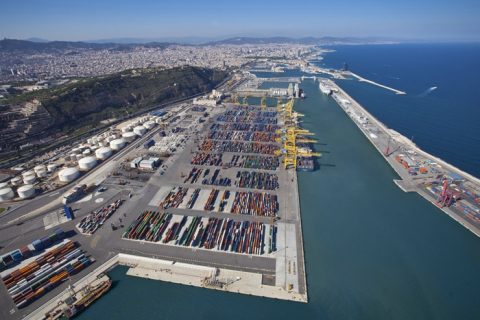 A six-point plan proposes actions that will ‘facilitate the development of efficient and competitive rail services’ to meet the needs of intermodal transporters and companies in Catalonia. The aim is to increase the frequency and efficiency of rail traffic by making what’s described as a ‘big improvement’ on the current situation, but does not necessarily mean a ‘high level of investment’.

The plan was presented at the International Logistics and Handling Exhibition in Barcelona by Sixte Cambra, president of the Port of Barcelona; Santiago Bassols, CEO of BCL; Miguel Angel Dombriz, Head of Freight at Catalan Railways (FGC); and Ignasi Pinart, CEO of Hutchison Logistics Spain.

Its six proposals are: 750 metre-long trains as a priority for the ports of Barcelona and Tarragona and the commercial & industrial sectors of Catalonia; operation of International Union of Railways-approved locomotives; establishing a close relationship with spanish rail infrastructure manager ADIF; effective intermodal terminals; working closely with Spanish rail freight operator Renfe Mercancias; and improving the coastal route from Tarragona to Barcelona.

The manifesto says it ‘reflects the needs’ of industrial and commercial partners in the Catalonia region, as well as the prinicpal ports of Barcelona and Tarragona, which are demanding the infrastructure and operational conditions necessary for rail freight to compete on a ‘continental scale’. “For the development of these rail services, intermodal operators should be able to operate longer trains, rolling stock should have good rental service, (be) more diversified and adapted to the terminals,” it says. Establishing ADIF as a key business partner of railway operators through ‘close and effective dialogue’ is also necessary.

The manifesto is the result of interviews and workshops held over the past few months with key regional stakeholders, including Foment del Treball Nacional, the main body representing businesses in Catalonia; PIMEC, which represents small business enterprises; and the General Council Chamber of Commerce of Catalonia.

Rail traffic at the Port of Barcelona has increased considerably over the last few years, due mainly to investments by the port and a growing number of private operators. The port’s share of regional rail transport increased from 2.6 per cent in 2006 to 12 per cent in 2016, with the aim of achieving 20 per cent. It has rail links to Madrid, Zaragoza, Lyon, Bilbao, Lisbon, Lleida, Burgos and Vitoria-Jundiz, and was the first port in Spain to send and receive goods using the international rail gauge. It remains the only Spanish port with a direct rail connection to mainland Europe.

The long-awaited Mediterranean Railway Corridor meanwhile, a long-awaited rail infrastructure that will connect key ports along the Mediterranean coast and through Europe, remains one of the Catalan government’s priorities for investment from the Spanish central government, according to the Catalan News Agency. Reporting from the European Sea Ports Organisation Annual Conference which took place in Barcelona, it quoted Josep Bull, Catalan Minister for Territory and Sustainability, saying there was a ‘clear demand’ for the project, but admitted he was ‘surprised’ the Mediterranean ports’ demand to build the corridor had ‘more allies’ in Europe’s northern ports than within Spain