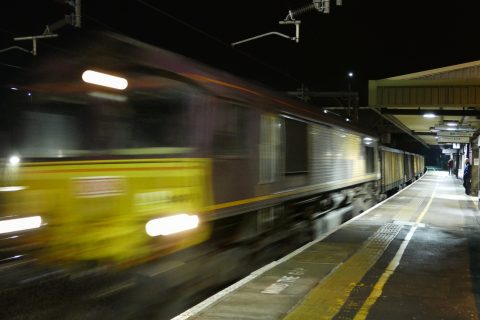 Intermodal up but UK rail freight down overall

Rail freight volumes in the UK towards the end of 2016 were down almost three per cent on the same period for 2015, new figures show. The Office for Rail and Road (ORR) says 4.42 billion tonne kilometres of freight was moved in the third quarter (Q3) covering the period between October-December, with some notable increases.

The ORR said there were many possible reasons for the trends seen, with the rise in construction materials for example ‘largely due’ to an increase in residential work, with more construction materials moved by rail in Q3. “Domestic intermodal showed an increase this quarter compared with the same quarter last year due to the growth in consumer focused service industries such as retail services,” it added.

The total amount of freight ‘lifted’ in Q3 was 20.8 million tonnes, down sharply by 9.6 per cent on the previous Q3. Unlike freight per se, this category measures the mass of goods carried in tonnes, excluding the weight of the locomotives and wagons, and takes no account of the distance travelled. The amount of coal lifted was 3.4 million tonnes, a big fall of 43.4 per cent compared to the same quarter last year.

In the international category, better security at the Port of Calais was said to have helped increase the flow of freight in and out of the ferry terminal, resulting in an upturn in international rail freight traffic compared to the previous Q3.

“The decision to phase out coal-fired power stations in order to reduce carbon dioxide emissions continues to affect the amount of coal freight moved by rail this quarter compared to same quarter last year,” it added.

From a peak of 455,561 freight train movements and freight lifted in 2005/06, there has been a steady decline, which the ORR says has been influenced by a mirrored decline in some traditional industries.

“The reductions over time could be due to improved utilisation of freight capacity as the levels of freight being lifted and moved in the four year prior to 2015-16 were similar to those in the mid-2000s but with much fewer trains,” it said.

The figures are available in full from the ORR website.