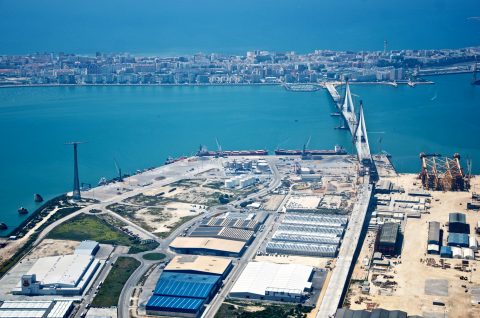 An investment programme of around 850 million Euros has been pledged for freight rail services and lines supporting Spanish ports, the Government has announced. A series of projects aimed at improving the country’s land-to-sea multimodal connections will take place over the next four years.

Ferrol, Cadiz and Barcelona are among the locations that will feel the benefits of the Investment Plan for Port Accessibility 2017-21, unveiled by Spain’s Minister for Development, Inigo de la Serna. Rail freight traffic between ports has grown by nearly half (43 per cent) since 2011, says the Ministry. In 2016 around 15.8 million tonnes were transported by rail, and that is expected to rise to 16.2 million this year.

Barcelona Port Authority and the Administrator of Railway Infrastructures (ADIF) will provide 72.6 and 77.2 million Euros respectively in a joint scheme for a new freight link to the Port of Barcelona. A further 95 million Euros is being invested at Ferrol, in the north west of the country, on a single track link to the outer port, comprising a tunnel and viaduct. The Government estimates the line will be accommodate around 500,000 tonnes of freight annually.

The Ministry for Development says it plans to spend around 1.42 billion during 2016/2017, and of that just over 500 million Euros is for port areas and around 463 million Euros for the so-called ‘last mile’ connections linking ports and the national roads infrastructure.

This latest investment programme complements plans recently announced to establish a new modern freight corridor in the east of the country. A 50 million Euros project to improve the cargo connection between Valencia and Zaragoza is just one element of a wider 100 million Euros funding package for ports’ rail links.