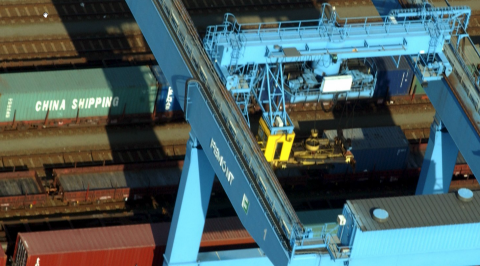 The rail shuttle between the Port of Antwerp and Linz is pulling in significant numbers of new freight customers. Austrian shipping firms are re-routing traffic via Antwerp thanks to the performance of the service launched last year.

A joint venture between Rail Cargo Logistics Austria and the Antwerp-based Rail & Sea, the service began with three weekly round trips in May 2015, and this was increased to four – soon to be five – earlier this year. The Port of Antwerp says this is proving a real success, with several companies taking advantage.

After switching its supply chain from Brake and Hamburg to Antwerp, the Austrian Wood importer Leimuller recently had its first consignment of nearly 10,000 square metres of sawn lumber from Siberia handled by Antwerp’s partner Zuidnatie. They will also handle the future unloading, storage and loading of the rail wagons on behalf of Leimuller. Over the course of the next two years the frequency will be increased to five round trips per week, so that shippers can rely on a daily rail service during weekdays.

The Port of Antwerp meanwhile has been described as the ‘engine of the Flemish economy’, generating a significant part of its wealth, according to new figures from the National Bank of Belgium. Freight traffic handled by the port in 2015 created a direct added value of 10.9 billion euros, an increase of more than 900 million euros on the previous year. compared with 2014.

It is Europe’s second biggest railway port, with 1,055 kilometres of track and 26 junctions. It handles around 250 trains a day, and transports 150 container shuttles every week to 24 destinations in eight countries.