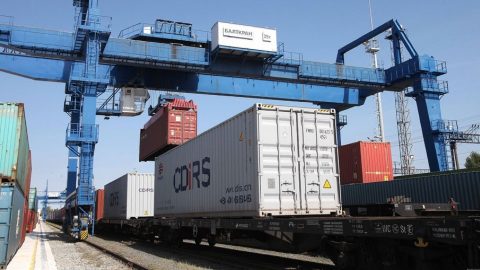 The New Silk Road may face turbulent times at the moment, there are also positive effects of the instability on the corridor. The congestion on the New Silk Road has seen an impressive drop, with all routes showing lower delay figures than at the beginning of the year.

Although official figures have not yet been published, the logistics industry at large reports of a decreased demand for services on the main route between China and Europe. This route runs through Russia and Belarus, and although sanctions in principle do not stand in the way of this rail freight journey, there is a growing list of customers and transport companies that do not wish to take this route for the time being.

But as the Chinese firm New Silk Road Intermodal notes, there is a positive effect of this too. In its week 10 update, the company writes: “Due to the Russia-Ukraine conflict, the new bookings for China-Europe freight trains services dropped rapidly this week. Most shippers have been cautious in rail transport. Meanwhile, the overall transit time has greatly shortened, as the best transportation efficiency has been recorded in recent months.”

The company backs this up with figures of the average delay days of trains from several Chinese hubs to Europe, in the weeks 3 to 10. In week 8, the Russian invasion of Ukraine commenced and the first sanctions were already in place that weekend. In week 9, more sanctions followed, and the market started to respond.

The delay days could have been even less, if it was not for the current hold up at the Khorgos border point. According to New Silk Road Intermodal, there has been a shortage of number plates, which resulted in low-efficiency of handling the containers. This has been the case for more than a week now, and has not yet been resolved.

Better transit times for a while

Congestion on the New Silk Road was a real challenge in 2021, but had already decreased in the first weeks of 2022 due to the Chinese New Year celebrations. During this time, production in China slows down, and the supply for westbound trains become less than usual. In this period, backlogs are often handled and minimised.

Half-way February, positive signals started to emerge from the industry. “It is worth mentioning that currently the transport time to Poland is less than 20 days for several weeks, and last week we recorded the first two trains that arrived in Małaszewicze within 14 days”, said Jakub Walczak from C.H. Robinson in week 7, just before the war in Ukraine started.

For a long while, transit times of more than 30 days between the continents had been reported, and some even argued that sea shipping would be faster for as long as congestion was plaguing the corridor. The main reason cited was an increase in demand, while popular border areas were not able to deal with the sudden rise in numbers.