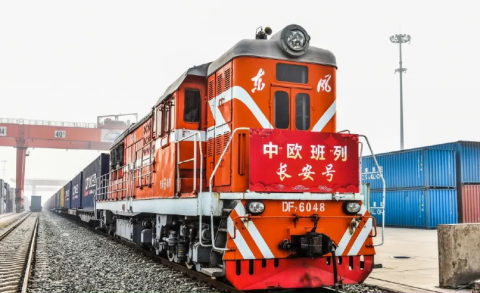 The first Budapest-Xi’an return train departed on 21 July. It left from Budapest, the capital of Hungary, crossed the border with Ukraine through Zahony, and travelled through Ukraine, Russia, Kazakhstan before finally arriving in Xi’an. This route is expected to be around seven days faster than the traditional route via Malaszewicze in Poland.

The connection between Xi’an and Budapest began with the first train’s departure on 1 April 2017, a route using the traditional route via Poland. In August 2020, the Dry Port Group also launched the Central and Eastern Europe Express, a direct train from Xi’an to Budapest, Hungary, via Chop, Ukraine, with a transit time of 13 days.

However, the trains were only westbound, with not much demand for volumes on the way to China. The first Budapest-Xi’an train is significant because it starts a new cycle of export trains from central and eastern Europe towards China that the Xi’an dry port wants to keep regular.

Zahony, located on the Hungarian-Ukrainian border, is an emerging transhipment point for China-Europe trains, where transit goods are transferred from broad gauge to standard gauge tracks. Over the last ten years, the rail network and transhipment facilities in Zahony have seen many upgrades. Last year, transit cargo in Hungary saw a tenfold increase, with six to eight fully loaded trains passing through the Zahony border crossing each month, compared to four trains per month in 2019.

The surge in freight traffic is due to improved infrastructure and has a lot to do with the focus of major local operators. East-West Intermodal Logistics Plc is building a new terminal in Fényeslitke, a city some 22 kilometres from Zahony, to facilitate the transit of Chinese goods through Hungary. The 85-hectare site is expected to handle one million TEUs of intermodal cargo per year when completed.