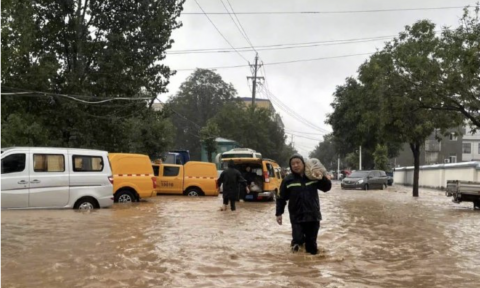 An unprecedented flood in Zhengzhou, China, is putting the city under a red alert. People have been killed and displaced, while infrastructure suffers substantial damage. Rail freight operations between Zhengzhou and Europe are also disrupted since last-mile operations in the supply chain are blocked while trains cannot move or are stranded en route due to the high water levels.

On 20 July, Zhengzhou suffered the heaviest sustained rainfall on record, triggering severe flooding and disrupting traffic. The heavy rain led to severe flooding in Zhengzhou city, with water levels in many rivers rising and many reservoirs exceeding the flood limit. Sources close to the situation said that the underground is shut down due to flooding, freight railways are disrupted, and highways are temporarily closed, with no set date for traffic recovery.

According to Will Kong, the Executive Vice President of T.H.I. Railway Business Unit, “the current operation of the China-Europe train through Zhengzhou is quite normal, with an estimated delay of 2-3 days. The loss of goods accumulated in the warehouse is not significant because there were precautionary measures before the heavy rain”. T.H.I is a forwarder that primarily uses the route through Zhengzhou on the way to Europe.

Moreover, it is worth mentioning that with air and sea transport capacity reduced, many exporters have already started shipping Christmas season products destined for the European market by rail to avoid delays. This means that the demand for rail freight at the end of this year is being shifted to the present time, and the export peak may come earlier than expected.

The flooding in Zhengzhou, one of the five major consolidation centres for China-Europe trains, shifts the export pressure to Europe to other consolidation centres. In addition, Zhengzhou is a must-go destination for East and South China towards the Northwest border. The city is a crossroad when it comes to crossing specific border points, and the current operating conditions of Zhengzhou Railway will also affect the shipment of other trains.