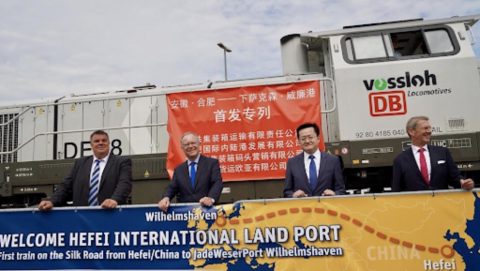 The first train from Hefei, Anhui Province in China, arrived at Wilhelmshaven, the only deep-water port in Germany, on 13 July. The train carried 100 TEUs of goods, of which more than 60% were local products from Hefei, such as white goods, machinery parts and car parts. The train was operated by DB Cargo Eurasia, while the next service is scheduled to take place during July.

On July 13, the train slowly pulled into the Wilhelmshaven railway yard. During the reception ceremony, it was welcomed with warmth by many political, economic and media representatives. Among others, present were the Chinese Consul General in Hamburg, the German Governor of Lower Saxony, the Mayor of Wilhelmshaven, and the President of the Wilhelmshaven Marketing Group.

This new train service marks the first time the two provinces established a rail connection since transport between them was mainly carried out through maritime links. The province of Lower Saxony, to which Wilhelmshaven belongs, has close economic and trade ties with China, especially the Anhui province and its capital Hefei. The arrival of this train means a further extension of Hefei’s China-Europe train map and the building of friendly provincial relations between the two regions.

Lower Saxony’s connection with the Anhui Province begins with the famous Volkswagen. Volkswagen’s headquarters are located in Wolfsburg, which also houses the world’s first and largest automotive theme park and service centre, Volkswagen City. At the end of 2020, Volkswagen started constructing a new electric car plant in Hefei. The construction will finish in mid-2022, and the car production will begin in the second half of 2023. By 2025 the company aims to produce 1,5 million electric cars per year, all developed and manufactured in-house in Hefei.

Wilhelmshaven is Germany’s only deep-water port and a traditional German energy, chemical and military port. Lower Saxony and Bremen jointly finance the container port area in Jade Bay on the North Sea. Its facilities include a 130-hectare container terminal with a design capacity of 2.7 million TEUs and a 160-hectare logistics park in the port of Jade, which is operated by Eurogate Logistics.

Regarding the significance of the new train service for Wilhelmshaven, the Chinese Consul General in Hamburg, Du Xiaohui, pointed out that “the Hefei China-Europe train will bring new opportunities for Wilhelmshaven, which will become a new bridgehead for the transport of goods between China and Europe. Additionally, it will function as a gateway for Lower Saxony to the Yangtze river delta region in China”.