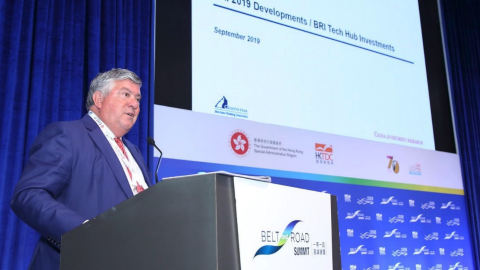 The UK is too distracted by European relations to take full advantage of overland trade opportunities. This was said by Henry Tillman, a London based Belt and Road specialist. “The British are currently failing to fully exploit the opportunities.”

As chairman of China Investment Research, the Chinese macro research arm of Grisons Peak merchant banking, most of Henry Tillman’s waking hours revolve around questions critical to international trade. The development of modern, rail connections, principally the three new Silk Road routes, is shaking up the air and sea duopoly.

“Rail is already showing potential to be the best blend of economy, speed and environmentally attractive options. Some Eurasian crossings are now down to twelve days”, he says. “There is even competition between rail routes, serving different markets, but the British are currently failing to fully exploit the opportunities.”

Having debated the emerging Polar Silk Road Route options at a recent conference in Iceland, Tillman is en route to engagements in Berlin shortly, where European manufacturers are already co-ordinating shipments to Asian and African markets. Those discussions may well feed into delegates at the European Silk Road Summit in Venlo later in November, but how many British voices will be heard? That more British goods are not already on Silk Road trains, he puts down to home affairs issues that are distracting investment decisions.

“This distraction”, he says, “led President Xi In 2018 to invite selected UK Chairman, academics and retired politicians, to visit Beijing and encourage inbound China investment opportunities. While there has been interest from German, French, and Dutch inbound Chinese interest over the past 18 months, the only significant investment from the UK that I have seen so far is in the financial services sector, and these have been comparatively small relative to other EU and Middle East countries.”

Tillman says that UK investment is not absent, but there could be much greater enthusiasm. Tangible trade in commodities and manufactured goods, which ultimately interest rail freight operators, is under performing. “We have seen a substantial increase in volumes across all three Eurasian rail routes, and the volumes are growing year on year. We are seeing something like two full containers going west for every one shipped east, but until recently that ratio was as high as four to one, and historically it has been as high as eight to one. There are British goods going east via the Silk Road, but Europe has already embraced this opportunity to a far greater extent.”

Tillman is also concerned that the British government has not done enough to promote trade along the Silk Road, other than concentrate on the end-to-end possibilities between the UK and China. He says far more could be done to convert favourable perceptions of British business based upon long term country to country relationships between the UK and a number of countries in Africa, the Middle East, Asia and that historical jewel of trading partners on the Indian subcontinent. “It’s very hard to focus outbound investment from the UK because of Brexit. The uncertainty is stalling the decision making. There is an investment backlog, and green shoots at the Government level, of beginning to fully nurture those relationships waiting for certainty before committing.”

Tillman is optimistic though that the desire for trade will ultimately override these issues, and technology will ensure secure passage for rail-borne consignments. “Digitisation and harmonisation of port to port goods handling will mean less likelihood of trains being delayed by border crossings. Britain was historically the ultimate western destination for Silk Road trade,” says Tillman. The unassuming northern English town of Macclesfield still has a museum to its silk woven trading heritage. “The UK was once the end of one of the Chinese silk roads. I am pretty certain that President Xi sees that it can be again.”