A new railway service has been launched on the New Silk Road, carrying containers from Yantai on the east coast of China to Moscow region in Russia. The connection has been established by RZD Logistics and its subsidiary Far East Land Bridge (FELB). The first train, consisting of 42 containers, departed China on 28 June.

The expected journey time of the train is 16-18 days. It travels through the territory of Mongolia, crossing the border at Erlian and Naushki. Two more trains will depart this month and starting from August, the route will become a weekly service. In the future, cargo traffic will be distributed not only through Mongolia, but also through the Russian border crossing of Zabaikalsk.

Yantai fulfills the function of a hub in the Chinese province of Shandong, where it consolidates cargo from large industrial cities as Qingdao, Zibo, Linyi, Jining and others. In addition, Yantai is connected to the port terminal. In the future it is expected to tap into freight flows to both Russia and Europe from Taiwan, Vietnam, Korea and Japan, as well as from the Chinese ports of Shanghai, Qingdao, Dalian and Tianjin, adjacent to the sea gate of Yantai city district.

The first train from Yantai includes consumer goods, equipment, spare parts and electronics destined for the Moscow region. Transporting a 40-foot container on this train costs 1850 US dollars, while the price per 1 cu. m is 110 US dollars.

‘Company should be in control of own supply chain’ 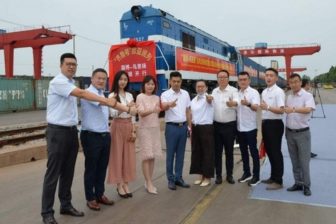