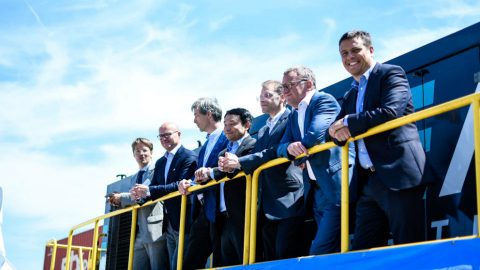 On Thursday morning the first train stacked with Volvo cars from Xi’an in China entered the Kluizendok terminal in the North Sea Port of Belgium. It was the official launch of a service that has been on trial since May this year, and with success. “This railway line means a reduction of transit time by 50 per cent”, said a satisfied CEO of Volvo Car Ghent Stefan Fesser. The service links to the nearby site of Volvo Car Gent.

Twice a week a train consisting of 190 vehicles of the popular XC60-models from China to Belgium, while the return journey delivers C90-, V90CC- and V60-vehicles to the Chinese market. The journey takes 18 days; another four days should be added for the transshipment in Malaszewicze. In the Polish border town, the Volvo cars are shifted from container trains from ro-ro trailers, or the other way around.

For Volvo, the new train journey represents a true modal shift. To the Asian continent, the automobiles used to be transported by ship; a journey that takes fifty days. “Putting these cars on a train means a competitive advantage of a 30-days shorter lead time”, explained Fesser.

Earlier this year it shifted from truck to train for its transport of Volvo cars to Italy. Twice a week the Belgian railway company Lineas connects Ghent to Sacconago close Milan (Italy), delivering various types of Volvo cars to the Italian market. “With this modal shift we literally took 5000 trucks off the road. All our Volvo cars to Italy are now on the train”, said Fesser.

The Hybrid solution was developed by ITL (Xi’an International Trade & Logistics) and its european partner ICL (Intermodal Container Logistics – Vienna/Austria). ITL already operates eleven services between China and Europe and it welcomes the new cooperation with Volvo. ITL chief Zhai Ruopeng explained that a state-of-the art distribution centre in Xi’an ensures a door-to-door service. “We want to increase the volumes, but more importantly, we want to improve the quality of such services.”

The modal shift policy of Volvo Ghent can only be welcomed by the North Sea Port, which consists of the sea ports of Ghent (Belgium) and Terneuzen and Vlissingen (the Netherlands). The port wants to “focus on rail and barge”, said Daan Schalck, CEO of North Sea Port. “Volvo Cars knows how to optimally use the good hinterland connections in North Sea Port by opting for sustainable rail transport to the European hinterland and to China. With this North Sea Port strengthens its position as a multimodal port.”

The relation with Xi’an is according to him an historic one, as both are known to be the oldest port and the oldest city in the respective countries. With Volvo, it has had a cooperation for the last 140 years, and it is a flagship industry for the harbour. It is therefore not unsurprising that the first train connecting the cities for its common customer did not just come in quietly. Fireworks, a train honk concert and delegation of many officials lauded the new partnership between the various parties.