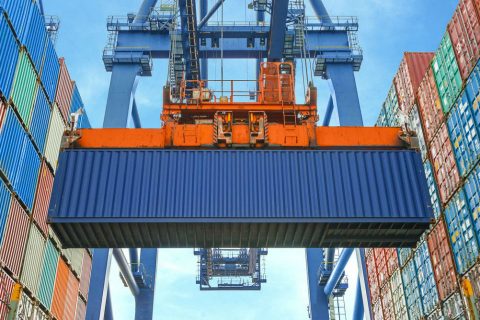 Tracing containers in the Netherlands could help the modal shift

The Dutch Central Bureau of Statistics has started an investigation into the container streams in the Netherlands. It wants to gain insight into the routes from start to finish. Reliable data on this is currently lacking. According to statistics firms the information could help push the modal shift from road to water or rail.

Every year about 4.5 million containers are unloaded in a Dutch port. Most of them enter with sea-going vessels in the ports of Rotterdam and Amsterdam, and then continue in the Netherlands or further into Europe with inland vessels, trains and trucks. A complete overview of this container transport is lacking.

To make the overview of freight transport in the Netherlands more complete, the Department of Public Works (Rijkswaterstaat) commissioned a pilot to collect additional data. Every container has a unique number. These numbers can be traced throughout the transport chain. Customs also registers them, including data such as country of origin, volume, weight and type of goods. By linking data from the various transport companies and customs, it is possible to map the entire transport chain of the goods in those containers on the basis of this data.

“The necessary data is available at transport companies”, says Willem Otto Hazelhorst, senior advisor traffic and transport at Rijkswaterstaat. “But so far it has been challenging to collect this data. However, thanks to improvements in documentation and automation, companies can now quite easily supply data digitally. Companies also see the benefits of more knowledge about the logistics system. All companies we approached to participate in the pilot agreed.”

About ten large companies, as well as carriers and terminals in the logistics sector are participating in the pilot and have already supplied crucial data. The pilot will run until 1 September 2020. “In the pilot, we are investigating what is needed to obtain sufficient coverage of the logistics system throughout the Netherlands. We also look at what is possible while respecting privacy. The Dutch Central Bureau of Statistics is a very important data source for Rijkswaterstaat and the business community, partly because of the strict observance of anonymity. Companies therefore see this company as a reliable party to supply data.”

After 1 September, the results of the pilot will be analysed and evaluated. Hazelhorst: “From the participating companies we have almost all daily container movements in 2018, for some also internationally. We expect to be able to indicate for individual containers how they traveled from China to their final destination, for example, via which route and with what content. We also expect to provide insight into the distribution of container transport across the various modes of transport, thereby identifying the opportunities for the modal shift from road to water and also rail. Then we also know better where possible reinforcement of the infrastructure and terminals is needed. ”

If the pilot proves successful, this information source will be used for the Modal Shift programme, which the Ministry of Infrastructure and Water Management and the Top Sector Logistics are now developing. The results and evaluation report of the pilot ‘More Insight in Container Transport in the Chain’ are expected to be published this autumn.

Detailed information about container transport is necessary, according to Rijkswaterstaat and the Dutch Central Bureau of Statistics, because the statistics are now classified by means of transport: sea shipping, inland shipping, rail and road. For some types of goods, such as bulk – including coal and iron ore – this provides a reasonably suitable picture. Bulk is mainly moved with a single means of transport. According to the Dutch Central Bureau of Statistics, this classification is less suitable for other goods, such as containers.

“Containers are often transferred from one mode of transport to another”, says Mathijs Jacobs, traffic and transport researcher at the Dutch Central Bureau of Statistics. “If you then look at their transport per mode of transport, the information about transhipment movements is limited and you count goods twice in the total picture. The sources for freight transport statistics are registers and surveys based on samples, but these are incomplete. We fill the gaps with estimation models. These are based on assumptions and do not show the entire freight transport chain. Especially the view of the load of individual containers and the routes they take is missing. ”