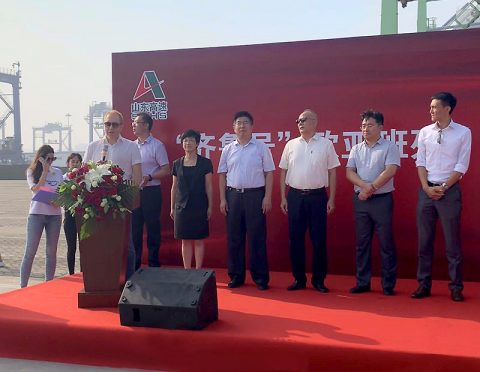 Another train from Yantai, now to Duisburg

RZD Logistics JSC launched a new transit service from the city of Yantai to Duisburg. The first train with finished household products, auto parts and components for electronics production left the Chinese city on 26 July and arrived at the German hub on 14 August.

Yantai lies on the east coast of China, in the province of Shandong. The route to Duisburg passes through the territory of Mongolia, the most convenient route for this particular service. It is available to a wide range of shippers. It is planned that at the end of Q3, beginning Q4 of this year, train departures will be scheduled on a regular basis.

RZD Logistics currently operates container trains from various cities of the Shandong province to Moscow, St. Petersburg, Perm, Minsk, and now Duisburg. Earlier this month it launched the service Yantai-Moscow and another new service will be launched from Jinan City, also in Shandong Province, to Budapest this month. “Our cooperation with Yantai station is developing quite rapidly”, said Vyacheslav Valentik, CEO of RZD Logistics JSC.

Yantai fulfills the function of a hub in the Chinese province of Shandong, where it consolidates cargo from large industrial cities as Qingdao, Zibo, Linyi, Jining and others. In addition, Yantai is connected to the port terminal. In the future it is expected to tap into freight flows to both Russia and Europe from Taiwan, Vietnam, Korea and Japan, as well as from the Chinese ports of Shanghai, Qingdao, Dalian and Tianjin, adjacent to the sea gate of Yantai city district.

“Shandong ranks third in the GDP ranking of various provinces in China. It is an industrialised region with a high level of both production and consumption, which gives us a good chance to work out the issue of reverse loading of transit trains.”