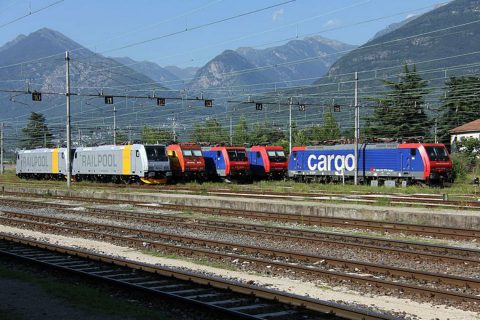 SBB Cargo has started removing excavated material from the Swiss Bözberg tunnel by train. Every day three trains move 1,800 tonnes of rocks from Schinznach Dorf to Wildegg. The construction of the new Bözberg railway tunnel is the largest single project in expanding the line between Basel to the Italian border to a 4-metre corridor.

The construction of the Bözberg railway tunnel commenced on 9 March 2016. The realisation of the project will generate around 850,000 tonnes of excavated material until June 2019. Of this total, around 500,000 needs to be carried away. If 56,700 lorry journeys were needed before, it now takes 780 trains to transport thismaterial, SBB Cargo pointed out.

The railway company explained that the excavated material is loaded on the railway in Schinznach-Dor, directly at the south portal of the new Bözberg tunnel. Via Brugg, three daily trains take the rock to Wildegg, where it is unloaded and, under the responsibility of the Jura Cement plants, transported by conveyor belt to the Oberegg limestone quarry. Here, it will be used for renaturation by the cement manufacturer.

SBB Cargo explained that the solution was born out of necessity as several municipalities had objected against the transport of the excavated material through the region by truck. “The SBB had to rethink if they wanted to keep their schedule”, the company explains. Stefan Heeb, project manager at SBB Cargo designed a transport solution that, according to SBB, was ultimately more convincing than the road version.

Because the railway currently only has one track, the usual model with one locomotive would not have worked, he explained. “There was no room for a locomotive change. So, a locomotive was attached to both ends of the train. This is a novelty because it needs more resources. Two locomotives are much more expensive.”

“The transport solution by truck would have been cheaper,” Thomas Zieger, overall project manager said. SBB had to handle around 6 million francs more. “But today’s solution is more ecological. It is an unconventional project that was born out of necessity and was absolutely worth it.”

The new Bözberg tunnel lies on the vital Gotthard Line, the Swiss trans-alpine railway line from northern Switzerland to the canton of Ticino on the border with Italy. In order to improve conditions for rail freight, the New Railway Link through the Alps (NRLA) was launched, a project aiming for an entirely flat railway passage. This will be achieved with the completion of the Cenerei Base Tunnel in 2020.

An another important target to be achieved in 2020 is to clear the north-south route for 750-meter trains with a 4-meter profile. The new Bözberg tunnel will be large enough to accommodate piggyback trains carrying road vehicles with a corner height of 4 metres. It will have double tracks and will replace the existing tunnel. With the Ceneri Base Tunnel and the 4-metre corridor, rail will become significantly more competitive on the corridor. According to SBB Cargo, freight trains will be able to transport up to 2,000 tonnes instead of the 1,600 or so tonnes that they do today.