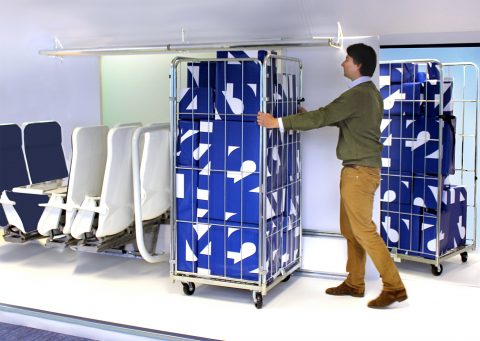 An innovation which enables train companies to remove passenger seats for freight space has received almost 350,000 Pounds in UK government funding to take the concept to the next level.

Seats and tables on a passenger carriage can be automatically folded down to create space for what 42 Technology calls ‘low density, high-value’ packages and other types of diverse cargo that would otherwise go by road.

As reported last year, the concept had been developed to trial level as part of a two-year programme, with funding from the Rail Safety Standards Board and input from across the rail industry. Developers say that if fully realised, it has the potential to help enable the likes of online retailers to offer later cut-off times for orders, faster deliveries and new services. By contributing to the road-to-rail modal shift, it will also help ease road congestion and help cut harmful emissions.

The Innovate UK funding – awarded under its ‘First of a Kind: Demonstrating Tomorrow’s Trains Today’ scheme – will enable 42 Technology to install its technology into a train carriage for the first time as part of a project expected to take 10 months. Following successful testing, Adaptable Carriage can then be piloted under the Flexible Freight programme being promoted by the UK rail industry’s Technical Strategy Leadership Group.

Jo Johnson said: “While we have introduced real-time platform information, taken big strides on safety and improved how we manage our railways to accommodate more services on existing tracks, the pace of change can sometimes be slower than we would like to see. The funding is part of a wider programme of activities to speed up the delivery of new ideas and high-value innovations, which can have a big impact on…journeys.”