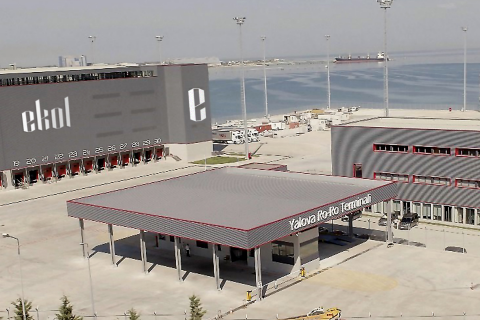 A new ro-ro terminal at the Port of Yalova became operative on Wednesday the 3rd of October. The terminal will serve rail freight operators importing or exporting goods to or from Turkey and beyond and as such, function as a freight hub connecting Europe and the Middle East.

The Yalova Ro-Ro terminal was commissioned by the Turkey-based logistics company Ekol with an initial investment of 40 million Euros. Beginning with an export trip, the terminal accepted its first vehicles on the 3rd of October, while the first ro-ro trip took off the next day. The official opening ceremony will take place in the next few days.

With an 80 thousand square-meter floor area, the terminal inhabits a 500 trailer capacity, a dock with 2 ramps, X-Ray, a customs office, a laboratory, agency offices, social facilities for drivers, a short-term storage area of 16 thousand square meters and an ADR warehouse.

Carcinogenic materials will be tested in the laboratories of the terminal, paving the way for exporting textile and leather products, shoes, stationary and toys. The department that will analyse the food items for import and export will be operational by the end of the year, Ekol pointed out.

Ekol runs a total of 48 weekly block train services between Trieste (Italy) and the German destinations of Kiel, Cologne and Ludwigshafen, Trieste and Ostrava (Czech Republic), Sete and Paris (both in France) and Budapest (Hungary) and Cologne. A new block train service was launched between Zeebrugge in Belgium and Trieste last week.

Due to existing ro-ro connections between Trieste, Turkey and Iran, the new train service meant that the company could provide services connecting the Middle East and European countries as far as the UK. Until recently, Ekol carried out its foreign operations from Haydarpaşa Port. These operations will now be shifted to the Yalova Ro-Ro Terminal.

“This investment was made in the most logistically relevant region of Turkey and will support the efforts of all our exporters, especially the automotive industry. Our investments have contributed to the development of both our company and the industry as a whole; this will soon help us produce much better solutions based on quality and profit”, Ekol’s Chairman Ahmet Musul said.