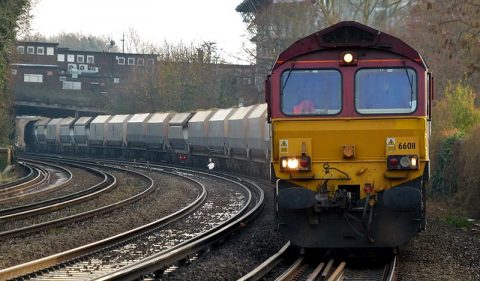 Liverpool City Region is witnessing a boost in rail freight connections with various initiatives being launched. A new rail terminal for construction cargo was opened, while a new container rail service at the Port of Liverpool will open this year. Both facilities will provide increased capacity for the inland movement of freight.

Improvement of rail infrastructure has been a main objective for Liverpool City Region, as main cities in the North are struggling to compete with London and the South EastWales. Since his appointment in May this year, mayor of Liverpool city region Steve Rotheram has emphasised the importance of the development of a good railway network to better connect important hubs within the city region, but also the North as a whole.

An important industry player in Liverpool city region, Tarrmac has joined hand with rail freight provider Freightliner for the launch of a new Tarmac rail depot, contained within Freightliner’s existing Garston complex. The depot is solely dedicated to the shipment of construction material, Tarmac’s main business, to the companies’ customers across Merseyside and Cheshire. The new terminal is expected to take 10,000 trucks off the roads every year, equalling a total volume of 300,000 tonnes of cargo.

“This depot will help serve the ambitious development plans that I have for the Liverpool City Region, and I am heartened to hear that Tarmac is putting environmental concerns at the centre of their thinking. Moving materials by rail over long distances has got to be better than thousands of HGV movements on our already crowded roads”, Rotheram said.

Liverpool is to gain further importance, as port operator Peel Port is to launch a new container rail service by the end of this year. The service will offer shippers integrated quayside-to-inland destination distribution, a first for the company. It will provide shippers a seamless route to any UK destination served by major rail lines, or vice versa, Peel Ports stated.

The announcement is in line with plans of the Port of Liverpool to gain strategic importance as it is the only major container port in the north or west of the UK. Peel Ports urges importers and exporters whose goods are destined for the North of England to switch delivery of ocean-freight from south-east ports to the Port of Liverpool. In November last year it launched Liverpool2, a deep water facility with an integrated rail facility.

Connections in the North

While regional efforts to increase connectivity are moving ahead, the northern city region is pushing for better connections with the rest of the country, as it considers government investment towards this aim insufficient. One of the main demands of Liverpool is to include it in the HS2 project. Currently, plans for this high-speed line do not include extra line capacity to the Liverpool city region, a campaign group called 20 Miles More pointed out.

Liverpool and Manchester have also argued for a new line between the two cities. The proposals are part of an initiave called the Norther Powerhouse Rail, or HS3, presented by Transport for the North (TfN) in order to improve especially the east-west connection in the North. Considering the ambitions of Liverpool to increase importance as a maritime hub, a better connection to the region is vital, Rotheram stated earlier.