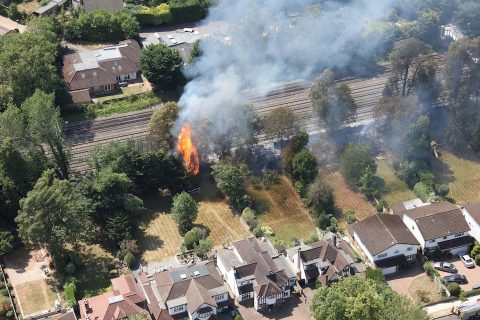 This week’s heatwave has put pressure on UK infrastructure like never before. The unprecedented closure of the East Coast Main Line, in the face of temperatures more akin to Spain than Stevenage, was the headline event that brought home the message. Especially to the transport secretary, Grant Shapps. Britain’s transport infrastructure is twentieth century at best, and unable to cope with the pressures faced in the twenty-first.

In answer to the question can our infrastructure cope, the minister was refreshingly straight-forward in his reply. “Yes but not at the moment is the simple answer to that”, said Shapps, speaking just before the UK Meteorological Office recorded the highest ever daytime temperature in the UK, 40.3 degrees at Coningsby in Lincolnshire on Tuesday, justifying the ECML closure order and ousting Cambridge as the record holder (38.7 degrees, set in 2019).

Wilting in the heat

On Monday, even before the height of the heatwave, travel disruption set in. Flights at London Luton Airport were diverted after the runway surface melted. That followed the Met Office’s first ever extreme heat weather warning, and a background canvas of ferry mismanagement, rail strikes and then, to cap it all, the ECML closing.

A lineside fire brought down trees and overhead line equipment at Harrow, North London, blocking the West Coast Main Line on Tuesday. The East Coast Main Line had already been closed as a precaution. Lineside fires in Herefordshire and Lincolnshire would have almost certainly required it to be closed as well. The Network Rail image below shows the aftermath of a burnt and fallen tree on the line.

It’s not just the overhead wires, the shoulders of the transport secretary may well be sagging too. “We experienced the hottest day ever recorded [on Tuesday]. You have Victorian infrastructure which was just not built with this level of heat in mind”, said Shapps. “As new railway lines go in, and the overhead lines are replaced, we are putting in [modern infrastructure] of much more resilience, [including] wires which can withstand the temperatures, but there are a lot of miles to cover and we are nowhere near that yet [in being able to guarantee trouble-free operation] in these unprecedented hot days.”

There has long been criticism of the East Coast Main Line, radiating from London King’s Cross to the north east of England and Scotland. The route was electrified in stages during in the economically challenged days of the late 1970s and the declining years of British Rail. Wires finally reached Edinburgh almost exactly 31 years ago, on 8 July 1991.

However, the project has remained dogged with problems, many of them anecdotally put down to a minimalist approach which cut costs and left very little headroom for expansion. Complete the saying “wires down on the…”, has become a catchphrase which is inevitably followed by the rejoinder: “East Coast Main Line”.

Upgrading has been underway on the ECML periodically ever since electric services began. Most recently, the national infrastructure agency Network Rail committed to extensive works, aimed at increasing traffic capacity in the south and power supply in the north. Grant Shapps however says that will not address the immediate problems brought on by extreme weather, and long-term climate change.

“Certainly not if we were working on an advanced warning of 10 days”, says Shapps. “Obviously it is not possible to switch out infrastructure in that period of time. Three years ago [in 2019] when I first became transport secretary, one of the first conversations I ever had was with the boss of Network Rail [Andrew Haines, Chief Executive]. He talked me through the new level of the standards for the quality of these wires we would use to withstand high temperatures. However, replacing them on the entire network, that is quite a long-term project.”

That ambition may be more achievable than it first appears. The UK government has passed into legislation a commitment to decarbonise the economy by the year 2050. Key to that ambition is a huge reduction in transport and logistics sector emissions. That, in turn, means ramping up rail freight, and electric rail freight at that.

“It cannot be delayed”, says Shapps. “I think we can see the urgency of the situation just through what’s happening this week. This [Tuesday] is likely to be the hottest day ever, but a large number of the previous hottest days in the UK have happened in the last 10 to 15 years. We are really genuinely seeing the impact of climate change and I don’t think you can therefore put off the 2050 target to get to net zero.”

Later in the day on Tuesday, as temperatures continued to break records, further lines out of London were restricted and closed, including lines from London Euston due to a lineside fire that damaged overhead line equipment. However, despite the minister’s reassurances, long suffering users of the East Coast Main Line, and the experience of many operators and customers may lead them to question the transport secretary, and say: “So, what’s new?” 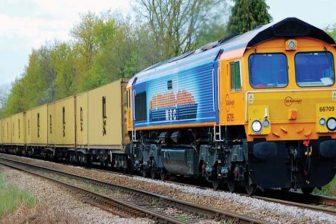 “More resilent”, comparatives (new speach) is misleading and wrong! (Less vulnerable is the relevant.)
Truth is, that any technicality, timely (optimal) back at Shift 100 years ago, now has “expired best date”!…
Benefitting of high qual. steel, no longer Rail, at railway…, remains Weak Link – when/if track is timely, etc.
Timely infrastructure safely, with margin, is, when, with “height” – for the new normal!
(Devices, by air and by sea – and the trucks… – upgrade, for lower costs, etc.!)