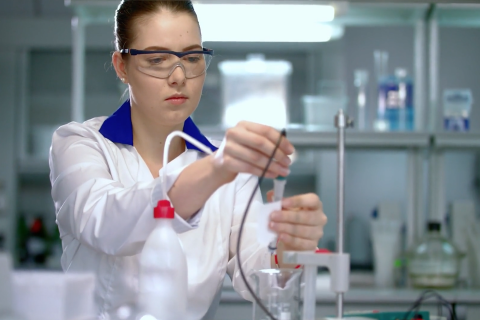 Rail could offer the best means of distributing COVID vaccines around the UK. With tens of millions of time-sensitive and difficult to transport doses to be delivered around the entire country, the best long-term solution is a co-ordinated programme of distribution by rail. Jeff Screeton, managing director at InterCity Railfreight, made his case to a world-wide audience at the Air Freight Conference 2020, organised ProMedia Group.

Time-sensitive biological vaccine doses have already started arriving in the UK, delivered by air from the laboratories and manufacturing plants of Pfizer/BioNtech in Belgium. Carried out under military-level security, the onward distribution of up to 800,000 doses has, so far, been fulfilled by road. But with trucks already facing traffic jams at the moment and with over one hundred times that number of doses required for the vaccination of the entire population, high-speed rail may provide a faster, more secure, and more reliable means of getting vaccines to the whole of Great Britain. British company, InterCity RailFreight believes it can offer that service to the nation.

Britain has led the world, in being the first nation to begin mass vaccination of the entire population. However, that means Britain is exploring all the possible logistics solutions, and may yet find a best practice way to get vaccines around the country. Unless the tight security has kept it a secret, rail has yet to play a role in this particular aspect of the fight to eradicate Covid.

Jeff Screeton, at InterCity RailFreight told the ProMedia Air Freight Conference that rail already has the expertise and experience to handle vaccine distribution, Furthermore, rail can do so in secure, reliable, and cold-chain environments, despite the design of modern trains posing a challenge. “In the past every train had a brake van, with space for cargo”, Screeton said. “Now, new trains are coming off the production line with barely luggage space. So, it has been a challenge, but we’ve managed to carve ourselves a particularly successful niche in moving medical consignments. As you can imagine in the last six months the amount covid testing samples we have moved around has absolutely rocketed.”

Medi FastTrack cold enough for anything

InterCity RailFreight has developed its own specialised bio-secure transport system, Medi FastTrack. To date, their focus has been on the speed, reliability and environmental advantages of using rail to move time-sensitive biological samples. However, with the likely requirement for mass-distribution of deep-cooled vaccine doses, Screeton says Medi FastTrack, and potentially other rail-based logistics solutions will be in demand. “We’ve carried samples and medication at ambient temperatures, chilled temperatures, and deep frozen in dry-ice. We’ve been asked if we could do down to minus 150 degrees. We have actually investigated down to minus 200, much colder than required for the current vaccines. We can move at high speed city centre to city centre, and could even deliver to a pop up centre at a station.

Specialist ultra-deep frozen packages makes even the conveyance of the Pfizer/BioNtech vaccine almost routine. Being able to exploit the passenger timetable, with express frequencies up to very fifteen minutes, gives unheard-of freight flexibility. Screeton says it makes the model they operate appear to be painfully simple, and very attractive for medical consignments. “A contracted courier collects from the client and delivers straight to the train, and the same process happens at the destination. It is door to door, and there is no hub involved, which is a distinct advantage. Services are running up to 125mph (200kph), and city centre to city centre average speeds of 90mph (144kph) which is quite any achievement. It’s something you just can’t physically do on the roads.”

Secure and high-speed to Britain and the world

Screeton points to the key advantage of major railway stations, in that they are almost always ideal urban hubs. With medical practice moving towards treatment in the home and away from hospitals were possible, he says there is an obvious use for those railway facilities. “There is a very strong desire to base medical facilities at railway stations. The UK National Health Service is seeking to deliver more service in the community, away from hospitals. Using stations can improve the delivery of home-based heath care, and we can we tap in to the reliability of the railway to really make the most of the precious time of health care workers.” Screeton says that even pop-up vaccination centres would do well to exploit the convenience and accessibility of railway stations. Put that together with fast distribution by rail to laboratory sites, and he is convinced it is a winning combination. The only links missing, argues Screeton, is a directive from the UK government, instructing train operators to lock out secure space on passenger trains and make this resource available. Given the required scale of the national vaccination programme – that is something Screeton is actively encouraging the Department for Transport to address urgently.

Britain has a globally significant part to play in the defeat of Covid. The UK will almost certainly become a major vaccine exporter. The ‘Oxford Vaccine’, being developed by a consortium of academic and industrial partners, should come to market early in 2021. The critical advantage is that the UK-developed vaccine requires less robust refrigeration, and is viable at domestic cool temperatures. The Air Freight Conference discussed the demand for vaccines in hotter climates, where cold chain logistics can be very difficult. Africa was noted as a continent-wide issue, and given a combined population of over 1.3 billion, there will be demand for vaccines from many manufacturers, including from the UK. Not only can rail freight get vaccines around the UK, it can play a part in getting vaccines around the world too. Screeton’s rocketing demand may yet have hardly taken off.

The Air Freight Conference is available for replay. Visit airfreightconference.com