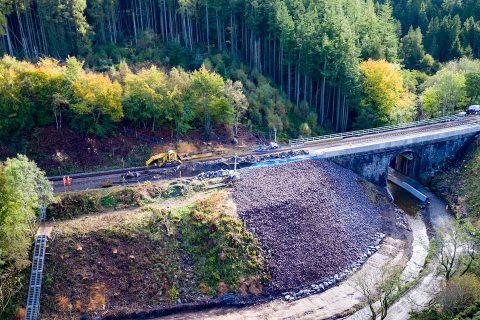 A month more is required to repair the line that connects most of the UK into Aberdeen, the centre of the offshore oil industry. All services have been suspended since a landslide and fatal derailment in August, which killed three people. The route in the North East of Scotland, which extends the East Coast Main Line north from Edinburgh, has been the scene of intense repair work. Engineers are now hopeful of full reinstatement in mid-November.

A series of landslips that contributed to the derailment of an express passenger train on 12 August, has left engineers with a difficult task to reinstate the mixed use main line around the coastal settlement of Stonehaven. After the sombre work of recovering the fatalities, complicated engineering work has included providing access to the remote site, recovery of the derailed set, extensive ground works, and rebuilding of the railway infrastructure.

A statement from Network Rail, the infrastructure manager in the UK, says work is now underway to relay 500 metres of double track. That work is only possible after extensive repair to a bridge and embankment, both badly damaged in the accident on 12 August.

The UK experienced several extreme weather events in the summer, and higher than ever rainfall, which adversely affected the rail network in several locations. Two large storm systems in mid-August caused severe disruption, particularly in Wales, the West Coast of England, and the North of Scotland. The most severe and tragic consequences were a series of landslips which derailed a ScotRail express on the morning of 12 August, killing three people on board.

Although Aberdeen is not a large generator of freight traffic, new flows had recently begun from the city’s Waterloo terminal in the city docks. While the local network is smaller than it has been historically, rail infrastructure around Aberdeen has been upgraded in recent years, particularly the line north and west towards Inverness, where capacity enhancements have been made, and new passenger stations opened, including an outer suburban halt at Kintore only last week.

While passenger services remain suspended, and replacement buses in operation, freight does have the option of a lengthy detour via Inverness, although pathing remains an issue on the line south from there, which is mainly single track between Inverness and Perth. The detour adds around 200 miles (320 kilometres) to any working southwards.

In addition to repairing a 70-metre bridge and relaying 400 metres of communications cables, engineering work is also being carried out to repair and extend drainage systems on the railway track and lineside embankments at the site. The contributing factors of weather-related degradation prompted Network Rail to introduce a range of additional safety measures, including an immediate inspection of hundreds of sites nationwide. These had been identified as higher-risk trackside slopes, similar to the earthworks at Stonehaven. For speed of survey, both Network Rail in-house engineers and specialist contractors were deployed, supplemented by helicopter surveys.

Network Rail has also launched two task forces, led by independent experts, as part of its long-term response to climate change. Network Rail says it already invests heavily in earthworks and drainage. Spending has increased significantly in recent years from just over half a billion British pounds annually between 2009 and 2014 to a budget of 1.3 billion annually for the period between 2019 and 2024 (around 550 million euros to 1.5 billion euros).