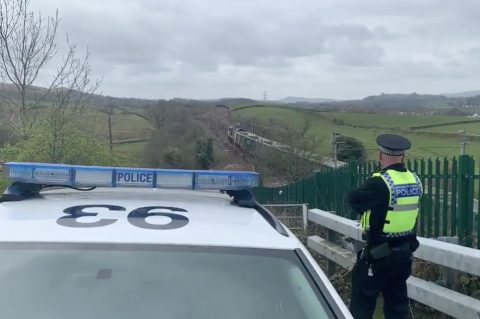 Rail enthusiasts: you may now spot your trains at home

The railway-dedicated arm of law enforcement, the British Transport Police, has praised Railcam, a network of enthusiast-maintained lineside cameras. They are appreciated for their ‘spotting at home’ initiative for helping people observe coronavirus lockdown, and helping keep the network safe and secure.

Rail staff are well known for their dedication and attachment to the industry. That has never been more evident than in the current coronavirus situation, when there have been countless examples of rail staff going above and beyond in order to carry out their duties.

Security of the network

The childhood pastime of ‘train spotting’ may not have the same popularity as in previous generations, but there is a very substantial proportion of the population for whom railways represent an important part of their social wellbeing.

However, the security of the railway network has arguably never been more important than at present. Those who may seek to interfere with operations for criminal purposes, have not been dissuaded by lockdown. Therefore, the work of the British Transport Police (BTP) has been as vigilant as ever.

These factors are among the inspirations for the network of around seventy observation cameras around the UK, brought together under the banner of Railcam UK, an online resource that provides streamed feeds from lineside locations all over the country.

While many people may legitimately, and legally, make a visit to the railway part of their daily routine, those opportunities have been limited by the lockdown currently imposed on the UK, which significantly curtails outdoor activity.

The BTP, who have a good relationship with what might be called friends of the network, have openly praised an initiative by Railcam, encouraging enthusiasts to respect the lockdown restrictions, and get their enjoyment of railway operations remotely.

“There is a lot of people having fun #SpottingAtHome”, tweeted a source from the BTP in Lancashire in the north of England. “Thanks to the people @railcamlive”.

Network Rail recently launched an annual initiative aimed at keeping younger people away from the railway. What would normally be the school Easter Holidays is a peak time for juvenile trespass on the railway. A heritage railway posted pictures at the weekend of a party of youths clambering over rolling stock – endangering themselves, and also breaking strict instructions designed to limit large gatherings in public.

It is a busy time for the BTP, and there is a renewed desire to keep the operational railway running, without interruption due to investigations. “If you’re looking for something to keep the children occupied then why not watch trains live, on high definition cameras, from home”, tweeted BTP Lancashire. “#SpottingFromHome has really taken off, thanks to @railcamlive”, they added.

The mental health benefits have not been underestimated either. With Britain now in the third week of lockdown, with only key workers permitted to move about the country unhindered, most people are confined indoors, with only essential local excursions permitted for food shopping, medical supplies and limited exercise.

Many online streaming services have been established, to help keep the population in contact with the country at large. Wildlife, rural, and urban cityscape cameras have proved popular beyond all previous measures. The Railcam network is among those experiencing a significant upturn in interest. If that is helping at least some of the population cope with lockdown and the Coronavirus crisis, then it is more than just British Transport Police that will have cause to say thank you.

1 comment op “Rail enthusiasts: you may now spot your trains at home”