With just a few days to go until what has been called the UK’s Brexit Election, political parties have been called upon to set out their rail freight policies. With an average of one daily freight train for each constituency, it is a national issue, that has importance up and down the country.

The industry representative body, the Rail Freight Group (RFG) has already demanded freight customers to be put at the heart of the national rail network, recognising their major contribution to the UK economy, and their capacity to grow and tackle the climate emergency.

Maggie Simpson, Director General of the RFG, has said that rail freight is delivering for businesses across the country, and clearly wants that taken into account at the ballot box, regardless of the political make up at Westminster. “The new Government has an opportunity to unlock significant benefits through their support for our sector and our plan sets out priorities areas which should be addressed. With trade patterns changing on the doorstep of Brexit and a focus on sustainability, our customers are pushing for further growth.”

Rail growth is mentioned in the Conservative Party manifesto, as the right-wing party seeks re-election. Their policy leads on completing Brexit, but it does make several references to rail development. There is a firm commitment to expanding the overall network, but a question mark is placed over the controversial HS2 project. The vastly over-budget high-speed line between London and Birmingham, which will free up capacity on the network, is currently the subject of an official review, which will report after the election.

The opposition, socialist-aligned, Labour Party is more clear cut in its support of the sector. If successful on 12 December, it will promote the use of rail freight in order to reduce carbon emissions, air pollutants and congestion on the roads, and expand the provision of publicly owned rail freight services. In their manifesto, attributed to the party leader, Jeremy Corbyn, the party says it will “unlock capacity and extend high-speed rail networks nationwide by completing the full HS2 route to Scotland, taking full account of the environmental impacts of different route options.” They also promise an environmentally-led programme of electrification, which would have investment implications for the UK’s large diesel freight fleet.

Most UK polls place the Conservative party as favourites to win the election, with a working majority over Labour. However, the Liberal Democrats, standing on an unequivocal ‘remain’ ticket, still harbour an ambition of making a breakthrough. The party, which shared power from 2010 until 2015, and last formed a government outright in 1910, devotes an entire section of its policy document to railways. However, it concentrates on managerial reform and passenger service improvements. Capacity enhancements are promised – including a blanket commitment to “restore twin-track lines to major routes” – which does provide encouragement for freight operators.

The Scottish National Party which is the third-largest political block in the UK parliament, despite standing in only the 59 Scottish seats out of 650 across the UK, integrates its rail commitments into an overall transport policy. They tackle the Labour Party, which proposes to bring the entire rail industry into public ownership, by saying that railways should be devolved entirely in Scotland. “We will insist our railways are run here in Scotland and that they can be run by the public sector,” says their manifesto.

All the main political parties make reference to decarbonising the economy, which is also a top priority for the Rail Freight Group. However, there is only scant mention of encouraging new markets and opportunities for rail freight, and none have taken the opportunity to echo the RFG in recognising the importance of rail terminals in the planning framework.

Thursday’s election will return a new government, which will have a significant agenda, not least reconciling the country to Brexit. Nevertheless Maggie Simpson of RFG thinks that the rail freight sector is of vital importance, regardless of whom the Queen calls upon to form an administration. “The new Government has an opportunity to unlock significant benefits through their support for our sector,” she said. “Our plan sets out priorities areas which should be addressed. We look forward to working with them to take this forward.” 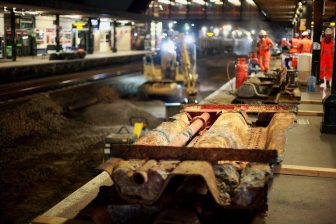