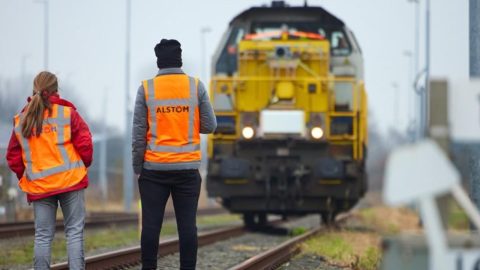 The test programme for the functioning of the intelligent obstacle detection and recognition system (ODS) with Alstom’s Automatic Train Operation system (ATO) took place on a shunting yard near the town of Oosterhout in the Netherlands. The foggy condition were an added bonus, as far as Alstom’s Abel Poelaert was concerned. “We had not been able to test the system in these conditions, which makes the programme all the more interesting”.

The programme consisted of object detection, recognising the wrong setting of a switch and automatic coupling. If the ODS works seamlessly with ATO, the combined effect can facilitate further autonomous driving operation into shunting activities. This, then, can potentially make freight operations more efficient and cost-effective.

The object on track this time around was a person, which the screen in the locomotive displayed much sooner than any train driver would be able to with the naked eye, especially with the foggy conditions. They many birds on site proved to be no distraction.

The locomotive again came to a halt when the faulty switch setting was detected. It was supposed to go straight, but couldn’t due to the switch ahead. Finally, the coupling operation too went very smoothly. The locomotive approached at the maximum allowed 30 kilometres per hour before slowing down well in advance to to creep towards the train car for coupling.

‘Cope with the unexpected’

ATO programma manager at ProRail Johanna Kijff was pleased with the results, but recognised that in the bigger scheme of things, the tests also show that railway operations lag behind the car industry of the aviation sector when it comes to autonomous operation and automated actions. That said, Monday’s test does represent an “important step in ATO”, she concluded.

Her statements were echoed by Stéphane Féray-Beaumont, Vice-President of Innovation & Smart Mobility at Alstom. “By integrating advanced obstacle detection into our autonomous driving systems, we have shown that it possible to make trains ‘see’ ahead and cope safely with the unexpected.”

Monday’s test marks the next step in an ongoing cooperation between Alstom, ProRail and Lineas, which was initiated in 2020. Earlier this year, the ODS was tested separately. Before the current programme, Alstom performed ATO tests at GoA2 level alongside ProRail on the freight-dedicated Betuweroute railway.