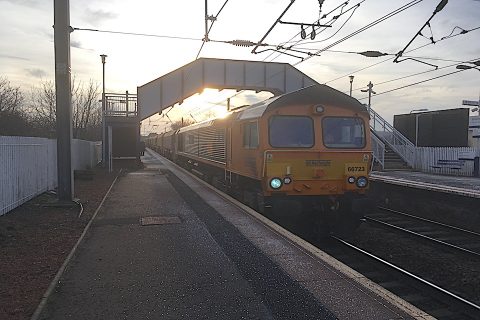 UK-based rail gauging experts D/Gauge are set to release their new ‘Rift’ software package to the industry at large. The Derby headquartered specialists say the clearance assessment software will transform the safety-critical and commercially-sensitive process. The package represents the culmination of two-decades of development. Innovations like this are on the agenda at RailTech Europe later this week.

The rail freight sector is putting ever more demands on the British railway network. The challenges of ever heavier, longer and faster train loads is testing the infrastructure to the limits. Despite a huge improvements programme, getting twenty-first century performance out of a system largely designed in the nineteenth century calls for innovation to keep the railway commercially viable. Specialists D/Gauge say they have at least part of the solution with their new ‘Rift’ software suite. They plan to unveil the package in full in early June, but are already field testing with pre-release customers.

According to the company’s own statement, gauging is vital to the safety, capacity and operation of every rail network. However, they say that the technology and the processes behind it have not changed at all in the twenty-first century. That is something the company is actively addressing. “Over the last two years, our team of software developers and gauging engineers have focused their attention on creating a new clearance product fit for the modern railway environment”, says their online statement.

The forthcoming release of their new software package – D/Gauge Rift – is, says the company, set to make clearance assessments easier, safer and faster. “The incumbent application used in the industry requires an elevated level of technical understanding and can take hours of manipulation and multiple processes to achieve the very minimum gauging standard”, managing director Colin Johnson explained.

The issue of gauging is of course not unique to the UK network. However the challenges faced by the British system, much of which was installed in the nineteenth century, present unique problems. The generally smaller and non-standard installations and clearances make the work of gauging much more complicated than in other parts of Europe. Interoperability will remain an obstacle to commercial growth, but also growing the domestic market needs every advantage made available.

Innovations like Rift are the staple diet of this week’s RailTech Europe 2021//LIVE conference, appropriately enough being held online for the first time in its fifteen-year history. Companies like D/Gauge will be showcasing their solutions to the rail industry at large. The UK sector is already well represented, as part of a world-wide sharing of knowledge and opinion (registration is free via this link).

The Rift software, say D/Gauge, has been optimised for track and infrastructure engineering. “It is a powerful, cloud-based gauging application created by our outstanding in-house team of software developers and expert gauging engineers”, says Colin Johnson. “The interface is intuitive and easy to use, and the assessments produced can take minutes compared to the hours currently facing engineers throughout the industry.”

The complex process of gauging make the railway immune to road-based issues, such as the highly disruptive so-called bridge bashing. “D/Gauge Rift will make whole teams more effective by saving time, revenue spent on complex training and overall headache”, says Colin Johnson.“Beta customers have been exceedingly complimentary about the software. The official online launch event takes place on 8 June 2021 and we look forward to being able to showcase the system and its full capabilities then”, Colin concluded.

D/Gauge was founded in 2008 by life-long railwayman David Johnson and aerospace and motorsport engineer Colin Johnson.