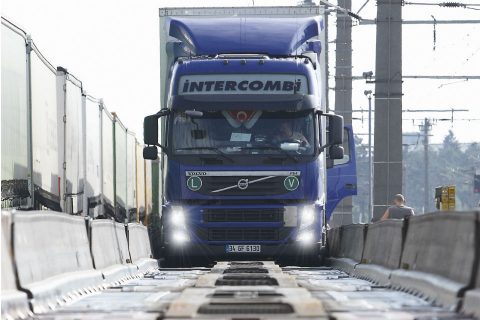 ÖBB Rail Cargo Group has finished the preparation for the sectoral driving ban in Tyrol that will take effect on the 1st of January 2020. The rail freight operator is boosting its capacity of the Rolling Road, a rail-mounted transport system for lorries. This will make it possible for trucks to travel certain sections of their route across Europe by rail.

If the extensive sectoral driving ban comes into force at the beginning of 2020, the state of Tyrol will further curb heavy truck traffic. The transit trucks affected by the ban on driving will only be able to continue their route via rail. The restrictions are for lorries or articulated vehicles with a maximum gross weight exceeding 7,5 tonnes. Also certain goods transported by trucks are prohibited suchs as certain types of waste, timber, paper, cardboard, liquid petroleum products.

The ÖBB already made preparations early and in close coordination with the state of Tyrol in order to be able to handle increased demand for ROLA, the rail-mounted transport system for lorries. The rail freight operator says that the ROLA prices on the Brenner axis will not be increased at the beginning of 2020. “This means that road transport companies affected by the sectoral ban on driving have a simple and attractive alternative to road transport”, according to the company.

“Due to the short loading and unloading times of the ROLA trains, rapid turns and high-frequency traffic can be achieved, which means that many trucks can be handled on the rail in a short time. This means that road transport companies can quickly move their trucks onto the rails without having to buy additional equipment”, the company claims. In addition to the Wörgl – Brennersee connection, there is also the Wörgl – Trento connection on the Brenner axis. The lorries are loaded at the terminals of Rail Cargo Group and transported by piggyback on special low-floor wagons.

ÖBB will provide a capacity of 250,000 trucks per year at ROLA on the Brenner axis from the beginning of the year and increase this to 400,000 trucks per year during the year. Ultimately, this means doubling current capacities. This means that the anticipated need to relocate trucks to rail can be recorded and transported through Tyrol in an environmentally friendly manner.

All ROLA low-floor wagons are already equipped with disc brakes and are therefore low in noise. The remaining freight wagon fleet of the ÖBB Rail Cargo Group already consists of two thirds of quiet wagons and by the end of 2021 more than 90% will be on quiet brake blocks. From 2024 the “Quieter Routes” will be introduced across the EU from 2024. In Tyrol, the Kufstein-Brenner rail route becomes a quiet route, which means a ban on loud freight wagons in Tyrol.