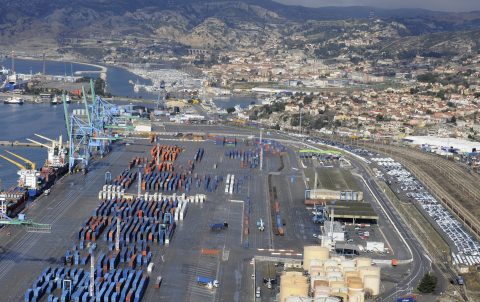 The ELETA project has resulted in more accurate ETA data. This is the first careful conclusion drawn on the ELETA final conference marking the last months of the ambitious project. The EU project aims to calculate more precise data on the arrival of freight trains, partly by using algorithms. Especially when it comes to this particular calculating method, the results are promising. But a lot remains to be done.

“Where data is complete and available in good quantity quality, machine learning is already improving ETA predictions”, said Marian Pufahl of Synfioo, one of the IT-companies involved. He showed an example of a train path between Ludwichshaven in Germany and Busto in Italy. In the period from September till October this year, the machine learning method resulted in a 75 per cent accuracy of arrival data, while real-time information led to an 68 per cent level up till three hours before arrival, the graph shows. But what does this mean?

Figures to estimate the time of arrival of a freight train are not new in the industry. However, the quality of the data has been poor. Most forecast messages are based on time-shifting; for example, if a train is fifteen minutes delayed, the forecast for the continuing train run is a delay of fifteen minutes. This method is quite rough, but until recently it was the best alternative available.

More exact data can be calculated by forecast calculators taking algorithms into account, and this is where the IT companies come in. By using the experiences of previous train journeys and delays from the past, Artificial Intelligence or machine learning can achieve a higher level of accuracy. Synfioo and HaCon are currently taking up this task for the ELETA project.

The final conference of ELETA, which took place in Brussels on Tuesday 6 November, marked the last few months of the project. It is one of the projects that was agreed upon during the 2016 TEN-T Days in Rotterdam, when the sector committed to boosting international rail freight by defining ten priority projects.

The ELETA project has mainly focused on letting stakeholders sign TIS user agreements. TIS is the platform where data is inserted, combined and calculated. The project has succeeded in the sense that most parties are now onboard. Around 80 per cent of all stakeholders are now part of the data pool. In the next few months the picture should be complete.

Although this sounds as a small chain in a large project, it was a major milestone to have everyone accept the terms of data sharing, explained Harald Reisinger, CIO of RailNetEurope. “The willingness was there, but there were legal implications to exposing data. There was need of a legal framework, and that has been established through the TIS. Within the project time frame, 30,000 TIS agreements have been signed between parties.”

The next step is gathering enough data of these companies and that takes time, explains Pufahl. “We have now examined 191 train journeys, and this has resulted in the numbers presented. But in order to achieve a significant success, we need big data. We need to examine more than a 1000 journeys. Only then can machine learning contribute to a more accurate ETA.”

Besides the numbers, there are some other challenges on the road. A unique reference number connecting different train numbers to one train run is necessary in order to share train running information, explained At Toet, project coordinator. However, these reference numbers are currently not widely applied.

“This causes a lot of concern”, explained Reisinger. “It means that we cannot properly track the cargo. A wagon has a number, and so does a locomotive. But it is not known in advance in which order these will be linked.” For the duration of the ELETA project, train numbers were linked manually or automatically. However, the solution is eventually in regulation, which comes in the form of the TSI TAF.

TSI TAF is the technical specification for interoperability relating to the telematics applications for rail freight in the European Union. It is EU regulation, aimed at standardising the data exchange in the industry. The next revision of the TAF TSI will be discussed in 2020, in order to be published in 2021. The introduction of unique train numbers is on the agenda.

Another question raised is whether data sharing should be made mandatory. If this opinion was shared by a majority was tested on the spot with a vote by the audience at the final conference. And in fact, 61 per cent voted in favour. “The only way forward is to make this mandatory by regulation, or it will take a lot of time to generate qualitative algorithms. And in competition with the fast-developing competing modalities, time is something we do not have”, concluded Josef Doppelbauer, Executive Director European Agency for Railways (ERA).

The counter argument however, is that not every company is willing to share insight in its accuracy data. It makes the RU vulnerable, as the customer could depend its choice based on these figures, some stated.

When it comes to the algorithms, the yield of the field research is yet to come, Doppelbauer thinks. He noted that the machine learning data could not yet become part of the handbook, as it requires “a longer validation”.

“As soon as we have a better idea about the quality of the data, we can standardise it.” This could only be confirmed by Symfoo. “We have a customer where we examined more than 1000 trips and in this case, we achieved an accuracy rate of 92.5 per cent”, said Pufahl.

According to the definition of an on-time arrival, the train may have a delay of no more than 60 minutes. When it arrives within this timeframe, it is considered ‘on time’. In reality, not even half of all freight trains accomplish these rates. The reliability of the rail freight sector has therefore been scrutinised, especially when compared to other modalities where delays are far less excessive.

A critical note to the ELETA project has therefore been that the focus should not only be on predicting the delay, but also on preventing it. “Why not be punctual?” asked Irmtraut Tonndorf of Hupac, acknowledging that the operator witnesses these delays on a daily basis. This was an argument echoed by most in the room. However, even when trains run punctually, there are always unexpected circumstances such as storms, suicides or construction works, noted Dirk Stahl, CEO of BLS Cargo. “These make accurate ETA data even more important.”

Why not be punctual?

“Our main demand from the industry is to know when we can pick up our stuff”, said Frank Andreesen, Director of shipper Covestro. “We need a proactive reception alert, which tells us when the shipment has arrived in the terminal.”

According to logistics provider Kube & Kubenz, the pickup time is what matters. “Not the time of arrival of a train, not the departure. We need to know when it is ready for pick up”, explained Michael Kubenz. His company is launching a notification system to this end, in which it has selected three ETA data points to share with its customer, among which the Estimated Time of Pickup (ETP). The system will be launched in Q1 of next year.

In any case, the ELETA project has delivered, is the overall conclusion. In order to complete the list of stakeholders involved it has gotten an extension till the end of 2019 to conclude the project. After that, a follow-up of the ELETA project is expected.

“Apart from knowing when the train will arrive, people want to know when the train has arrived. This is a different set of data which will help measuring quality. Both these data streams will continue to be collected after the project is completed”, revealed Ralph-Charley, Chairman of the UIRR.