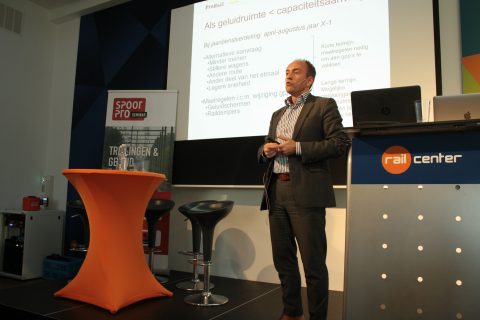 Quiet brakes for almost all freight wagons the Netherlands in 2025

By 2025, around 95 percent of the wagons of all freight trains running in the Netherlands will be equipped with quiet brake blocks. This is a result of European legislation that specifies quiet routes, only accessible for freight trains with composite brake blocks. Environmental effects team leader Chiel Roovers from Dutch infrastructure manager ProRail made these remarks during the SpoorPro seminar Vibration and Noise in the Dutch city of Amersfoort.

European legislation has recently stipulated that from 2024 onwards, certain routes will be opened for quiet freight trains only. Roovers: “In the Netherlands, all freight trains must be equipped with new, silent brake blocks, because they move throughout the entire country and they could no longer take certain cross-border routes routes otherwise.”

“The equipment of wagons with silent brake blocks is a result of a successful source policy. This means that we try to tackle noise pollution at the source as much as possible. A pilot with alternative, composite brake blocks showed a few years ago that these type of brakes amount to considerable noise reduction. Cast iron brake blocks result in rough wheels. By using composite brake blocks, the wheels remain slippery, which makes them quieter.

The Dutch government allocates funds from the Long-Term Infrastructure, Spatial Planning and Transport (MIRT) programme, which runs from 2013 up to 2028. These funds amount to a total of 1.05 billion euros in noise-reducing measures. A part of this comes from European subsidies.

A programme resulting from the MIRT is the Multi-year Noise Remediation Programme (MJPG) that started in 2012. This programme is being implemented by ProRail and Rijkswaterstaat, commissioned by the Ministry of Infrastructure and Water Management (IenW). ProRail is working on quieter railways, Rijkswaterstaat on quieter roads. The approach starts at houses and locations where the noise impact is higher than 75 decibels.

Various parties work together in the programme to limit noise pollution as much as possible. This is possible, for example, by operating quieter freight wagons, opting for different routes or at lower speeds. Sound barriers or rail dampers are also installed at noise bottlenecks, a location where the maximum limit for the number of permitted decibels is exceeded.

Last month, the European Union announced that it is investing 117 million euros in 39 major transport projects. Eight projects contribute to reducing noise in freight trains by upgrading the braking systems of freight wagons. Almost 75,000 freight wagons get this overhaul as part of one of these eight projects.