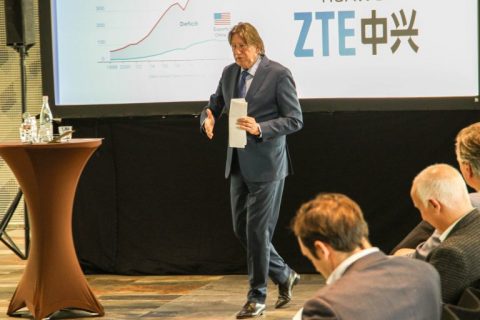 In Europe sometimes there is a lack of understanding that the One Belt One Road initiative is actually a political business case, asserts professor and China expert Rob de Wijk. “For the Chinese, it is not only about the logistic or economic advantages of the project, but primarily the political influence that it delivers in other parts of the world.

De Wijk was one of the speakers during last week’s Port of Rotterdam Debate, which was organised by Nieuwsblad Transport, the newspaper for professionals in transport and logistics in the Netherlands. “China is using the New Silk Road to get influence in, among other places, Greece, Hungary and Italy. And note that these are all EU Member States. In the Netherlands we have enough capital to resist the enticement of China’s millions. But is that the case for other countries? And if other EU countries are under political pressure from China, what influence does this have on political decision-making at the European level?”

And the great danger is in the politics that the country practises, cautions De Wijk. Although China is an important trade partner, we must warn businesses from the Port of Rotterdam about ceding control. “Don’t be naive about what type of country you are doing business with. In the Netherlands you can take a company to court, but in China there is no legal system.”

According to De Wijk, businesses in the Port of Rotterdam, as well as rail freight companies that are dependent on the port, are sometimes a bit too relaxed about the rise of China. There is a lack of urgency, as many people perhaps think it will have little impact on their business operations. Although that is the case for some businesses, De Wijk expects that the Port of Rotterdam can lose a considerable amount of freight traffic because of investments from the Far East.

De Wijk states that the import and export volumes in Rotterdam are under pressure from investments in other parts of Europe, such as Greece and Italy. For example, China recently decided to put money into Vado Ligure in Northern Italy. This port is small at the moment, but with cash from Beijing a terminal will be constructed that can accommodate the biggest container ships on the planet.

Moreover, during a visit to the port at Piraeus in November, Chinese President Xi Jinping stated that a new terminal of 2.8 million TEU must be constructed. Around the same time, it was announced that the Chinese state-run conglomerate Cosco Shipping Group had bought shares in the Greek rail operator Piraeus Europe Asia Rail Logistics (Pearl). Through this investment, the Chinese want to get a firmer grip on the Greek hinterland.

Cosco Shipping Group has also acquired a stake in the Bilk terminal in the Hungarian capital, Budapest. This fits into the plan to make the rail connection between China and Western Europe, which goes via Russia, more attractive. For these freight streams, the ports of north-west Europe would at best play a minor role.

Any multi government investment – stimulation program has a political background. Whether it is EU, China, Russia, USA, Canada.
The outlining of the warning of Prof. Rob van Wijk is one sided.
If The Netherlands or EU invest in multi-region development there is also a business, political and ecology paragraph.
The Silk Route development is much more than just a simple political tool, it helps us to change the transport modes from Air-Ocean to rail and in the meantime reduce the carbon footprint

sir. i don’t agree those theory. because i believe heart of Chinese trading is train trading.
it will brought massive occuring of carbon-dioxides.

I live in Argentina. mr. De Wijk´s words need much attention.
But he made a serious mistake when he put the examples of new infrastructure in the north and south of Italy and Greece, which will compete in the future with Rotterdam.
That is short-sighted.
Rotterdam knows quite well that this kind of competition was expected years ago.
He needs a wider view. See what this Chinese policy does in Africa, South America and the near East. All important for the EU Antonio Zuidwijk http://www.antonioz.com.ar