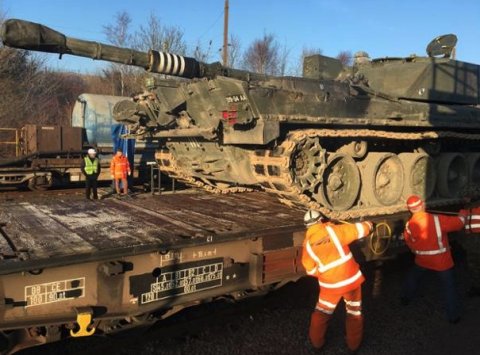 Rail carries weight of UK and US military

A unique rail freight service carried British tanks through the Channel Tunnel in an exercise designed to test the UK’s ability to quickly get military hardware into Eastern Europe. The night-time operation saw several armoured vehicles put on wagons and sent on a short return trip to France.

Though a long time in the planning, the event was kept low-key, with the Ministry of Defence (MoD) issuing just a single tweet and photo from its official @DefenceHQ Twitter account, saying: ‘@BritishArmy moving tanks through the Channel Tunnel in long-planned test overnight – means we can move kit by rail in the event of a crisis with Russia’.

An MoD spokesman said: “The Army successfully conducted an exercise to test the viability of using the Channel Tunnel to move vehicles and equipment to mainland Europe, adding to the existing range of options available and increasing the agility of our Armed Forces.”

It came shortly after the European rail freight network was also utilised by the US military in a strictly non-test operation to move heavy military hardware and weaponry into Poland. The Port of Bremerhaven in northern Germany saw the arrival three US military cargo ships, carrying a brigade of some 80 armoured vehicles destined for deployment on NATO’s eastern frontier.

Many were loaded onto trains before starting a long convoy across central and eastern Europe in military training exercises. The US Army said the deployment was part of the US mission Atlantic Resolve, aimed at ensuring security and stability in the eastern regions of the NATO alliance.