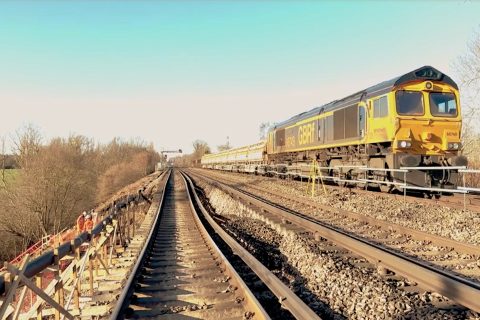 It’s not a major rail freight route, but reinstating it could be a major job for rail freight. It will take almost 100,000 tonnes of stone and steel to underpin the collapsed rails at Hook, on the east side of Basingstoke on the way to London. The line collapsed on Sunday 15 January after weeks of heavy rain caused a three-metre high embankment to give way. Network Rail, the British infrastructure agency, has admitted that the landslip will take weeks to repair.

The embankment which has collapsed on the London and South Western main line is not the only earthworks issue faced by Network Rail. It is however, possibly the biggest. In an area of the country plagued by earthworks failures, this collapse is the most disruptive to operations overall. Fixing is going to take weeks. Train loads of materials will be needed, as well as the laying of a temporary access road across farmland to reach the site.

The landslip, on an embankment to the northeast of Hook station, has left only two tracks of the four-track railway passable by trains, with both tracks designed to be used by London-bound trains only. Already Network Rail has been in possession of the railway between Basingstoke and Woking to allow engineers to reconfigure the track layout and bypass the landslip. “We’re going to move the track onto a stable section of the embankment so that we can have a line running in each direction”, said Mark Killick, Network Rail Wessex Route Director and a veteran of some major mishaps over the past few years, including the intermodal derailment at Southampton which greatly impacted freight operations. “While it’s a very unusual approach to change the track layout, it means we can run more trains and give customers a much better experience while we fix the embankment”, he said.

Half a billion pound budget

The landslip is in a remote location. Engineers needed to build a 580-metre-long access road across fields to get materials and machinery to the site. To make a permanent resolution, the plan is to construct a 60-metre retaining wall, made up of almost one hundred 12-metre long ‘sheet piles’ which are driven into the ground to stabilise the embankment and protect the railway from future landslips.

The railway through Hook was built 130 years ago, out of London clay, which has since been found to be a notoriously unsuitable base upon which to build a railway. In the Southern Region of the British railway network, there have been more than 200 earthworks failures in the past three years. Network Rail has a half a billion pound, five year budget for handling this problem alone. The agency says landslips are becoming more and more frequent due to climate change.