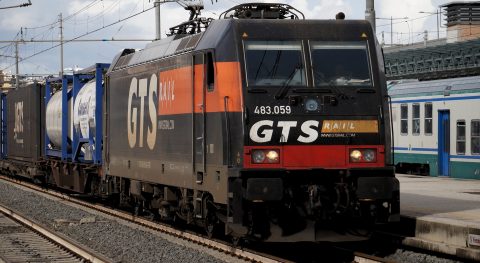 The logistics terminal Interporto Campano, 30 kilometres east of Naples, was forced to close its rail freight operator Interporto Servizi Cargo (ISC), at the beginning of 2023. However, there still seems to be hope for the terminal since GTS Rail, a rail freight company from Apulia, is intervening to ensure that operations can continue.

GTS has, in fact, been already active in the terminal with three weekly connections from the Interporto Campano to their terminal in Segrate, near Milan. To try and make up for the departure of ICS, GTS is doubling the frequency of this service to six. The new schedule will be launched on Thursday, 26 January, and the plan is to handle 17,000 containers every year with this service. GTS can, in fact, count on convoys made up of 30 45-feet units.

The rise and fall of ICS

ISC stopped all its activities as of 1 January 2023 because of severe financial tension. Since June, the company requested access to the new procedure for a Negotiated Settlement. Negotiated Settlements in Italy allow a company that is nearing bankruptcy to name an independent expert to salvage the salvable. However, partnership agreements were not found, and the company was forced to halt all trains at the end of December 2022.

The shutting down of ICS is expected to have a significant impact, considering that the company moved over 2,600 trains in 2021. The Interporto Campano terminal, moreover, plays an important role as a hub connecting the south with the north of Italy and, consequently, with the rest of Europe. A source from the terminal confirmed that other companies are interested in joining GTS and keeping trains going to and from the terminal. However, they could not specify which other companies.

The Inteporto Campano terminal in Nola was opened in 1999, covering an area of over 3 million square metres. The terminal is the only one in Italy with a highly-automated internal rail station equipped with 13 electrified double tracks. The Interporto Campano offers logistics services for more than 200 companies from different sectors. Among the terminal usufructuaries there are Fiat Chrysler Automobiles Italy (FCA), food giant AIA, and clothing brands Piazza Italia and Alcott.

The Interporto Campano can count on an area of 200,000 cubic metres dedicated to storing refrgierated goods up to -30°C. Moreover, FCA, MSC, and Alstom chose the terminal in Nola as their logistics centre for the area. Another important aspect of the terminal is that it can deal with all It now remains to be seen if enough operators will follow GTS Rail’s steps to maintain the Interporto Campano at its usual levels.