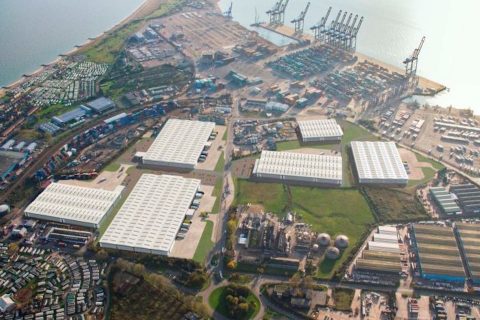 Freeport East, the consortium including Felixstowe and Harwich, along with a host of other maritime assets, has received final Government approvals from Westminster, allowing it to move forward into the delivery phase. The development, which already hosts Britain’s busiest rail freight terminal, is expected to significantly develop its onshore capabilities now that the site has officially received the tax-advantageous freeport status.

According to the promoters, the development of Freeport East will provide a huge economic and employment boost to the East of England at large. It is, however, expected to create up to 13,500 new jobs, most of them from the locality, including nearby Ipswich. The freeport status will be cemented by a twenty-five million pounds (30 million euros) of government funding to support infrastructure enhancement. That almost certainly means further development of the multiple rail freight terminals within the complex. Both Felixstowe and Harwich also already have passenger terminals and could see additional services or infrastructure if the employment forecasts are realised.

The UK government has been keen to bring online a series of freeports as part of their ‘levelling up’ agenda – intended to improve the economic performance of Britain’s regions outside London and the South East. “This is a major milestone for Freeport East and the result of a great deal of hard work from all our partner organisations”, said Steve Beel, the recently appointed Chief Executive of the project. “Freeport East is a locally led initiative but has global connections and ambition. We will attract new investment to create a hotbed for trade, innovation and green energy, driving growth in both the regional and national economies. “We will look to partner and collaborate with all organisations interested in the economic success of the region.”

The ports upon which Freeport East is founded, already depend heavily on rail freight. Given the government’s stringent legislation to reduce the economy to net zero carbon emissions by 2050, it is unlikely that further road logistics will be tolerated. However, impressions of the Gateway 14 development are distinctly road based, and the rail branch that serves Felixstowe, one of the busiest container ports in the world, is already capacity constrained, and needs to benefit to the full from enhancement projects on the lines that feed into the ports – notably the Ely project, which is intended to improve operations through the complex junction there.

“This Freeport is going to give local economies a massive boost, unlock a new state of the art business space and create tens of thousands of highly skilled jobs”, said Dehenna Davison, the Levelling Up Minister. “As Freeport East takes flight, we are maximising the opportunities to drive growth and throw our doors open to trade.”

Freeport East covers an area within roughly 45 square kilometres of the ports of Felixstowe and Harwich, and surrounding communities. The three main development sites at the Port of Felixstowe, Harwich International Port and “Gateway 14” near Stowmarket. Work has already commenced on the Gateway 14 development and there are ambitious plans to create a green energy hub in Harwich to serve sectors including offshore wind. Professional subscribers to RailFreight.com would like to see ambitious plans for rail enhancement. However, all the developments have an emphasis on supporting innovation, skills development and net zero as well as acting as anchors for wider economic impact.