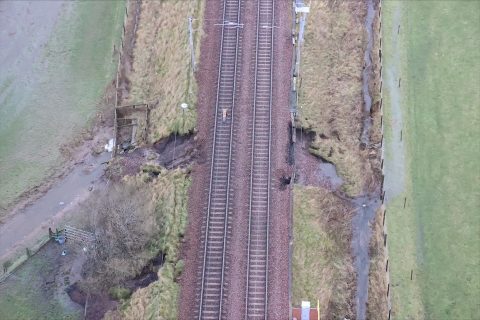 The cross-border West Coast Main Line between Scotland and England has been severed by a landslip following the end-of-year storm that ravaged the south of Scotland. The line, which is the busiest mixed traffic route in Europe, is closed between Glasgow and Carlisle, forcing all operators to seek alternative routes. Network Rail, the infrastructure agency, do not expect the line to be reinstated until at least Friday, 6 January.

Emergency engineering works are now underway on the West Coast Main Line near Carstairs Junction to repair flood damage. The route has been severed at a point south of the junction, denying access to Glasgow, Mossend, and other freight and passenger destinations. It also cuts off the West Coast from Edinburgh, except by a lengthy detour. The cause of the problem is an embankment beneath the railway, which was significantly damaged during extreme weather on Friday, December 30, and it will require extensive work to stabilise and repair the foundations of the tracks to allow the railway to reopen safely.

Engineers are working around the clock to remove landslip material affecting a forty-metre-long section of the line before beginning to reinforce the area with over 200 tonnes of new stone. Once works to strengthen the embankment have been completed, engineers will relay the track above and check signalling systems in the affected area. “These complex repairs will take several days to complete”, said Network Rail. “The line is not expected to reopen for passengers and freight services until at least Friday, January 6.”

Passenger services on the line affected are mainly operated by English-based companies, all of whom are subject to strike action in the first week of January. Freight operators are faced with the prospect of a lengthy detour to the East Coast via the Tyne Valley Route – which fortunately reopened just before Christmas after the significant damage caused by a derailed cement train in October. A diversionary route to Glasgow exists via Dumfries, which escaped closure during the flood events in late December. A more direct diversionary route to Edinburgh and on to Glasgow – via the Scottish Borders – is unavailable due to a planned closure … in 1969.

On today’s main line, the apparent damage is relatively minor. However, the underlying structure of the railway has been more significantly affected. “Flooding has caused significant damage beneath the track, and we will need to rebuild the supporting embankment before re-opening the line”, explained a Network Rail spokesman. “This is a very challenging project, but we understand the inconvenience closing the line will cause and are working hard to reopen the railway as quickly as we can.”

A rather optimistic advice note from Avanti West Coast, the main cross-border operator, encourages passengers not to travel north of Carlisle. While there are no passenger services north of Carlisle, an amended timetable is in place between Carlisle and London Euston. By approaching from the east, freight operators can still access facilities around Glasgow using the north chord at Carstairs Junction, which is already undergoing redevelopment. Facilities that are affected notably include Mossend International Railfreight Park, the Port of Grangemouth and the smaller but much heralded Highland Spring mineral water bottling terminal to the north in Stirlingshire.

Resiliency and redundancy, thus robustness, is needed – at any vital of society!
(Rapid shifts, abnormal weather, etc. is the normal – and has to be provided for!)
All other modes, those resilient, upgrade, add to edge, by lower costs, etc…
Now, 2023, for an optimal multimodal transport system, upgrading of the Weak Link, has to be top priority!
Low risk, high quality supply chains is a must, etc!
(“Optimal maintenance”, current mantra at railways, is suboptimal – and not sustainable.)