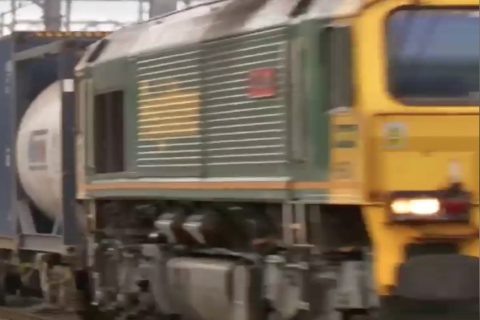 The latest figures from the Office of Rail and Road say that the long-running disputes in the railway industry have affected the volumes and performance in the rail freight sector. This comes despite the sector being largely uninvolved in the major disputes over pay, conditions and job security. Nevertheless, rail freight has been impeded by strikes in other part of the industry which have frequently brought the network to a standstill, and seem no nearer to resolution.

Freight rail usage and performance levels in the latest quarter (1 July to 30 September 2022) have been affected by the railway industry strikes in July and August 2022. The quarterly analysis from the Office of Rail and Road paints an unhappy picture, and the disputes have impacted all metrics in their latest statistical release. The headline total freight moved was 4.00 billion net tonne kilometres in the latest quarter. It was 6.4 per cent lower, compared with the same quarter the previous year.

Thirty per cent of trains cancelled

The ORR says that strikes have been the single biggest factor in reduced activity on the railways. Despite freight operators being largely uninvolved, observers have put the level of disruption in the sector at around thirty per cent of all freight movement being cancelled on strike days. That’s contributed to freight moved falling to the lowest figure for the July to September quarter in the current time series – effectively the last ten years – aside from during the height of the pandemic.

Total freight lifted was 18.7 million tonnes in the latest quarter, which is also a year on year fall. The contraction is measured at 5.9 per cent compared with a year ago. If there were economic factors alone responsible for that dramatic fall, Britain would be on course for a recession of proportions comparable with the depression of the 1920s. If that was not shock enough, the proportion of freight trains arriving within 15 minutes of scheduled arrival time, as measured by the ORR’s own metrics, was 84.9 per cent. This is the lowest level of freight performance since the time series began in 2013.

Most commodity groups saw a fall in freight moved volumes compared with the same quarter the previous year. “Intermodal maritime saw a reduction of 7.3 per cent”, say the ORR. “The continued disruption to deep sea shipping and supply chains is likely to have contributed to this. Reductions in consumer spend have affected imports of non-food consumer goods as the pre-Christmas surge, which normally starts in the July to September quarter, was not evident.”

The ORR also looked at international factors as a cause of freight’s poor quarterly performance. “There have also been ongoing production problems in China due to the pandemic and extreme heatwaves”, they say. Since intermodal traffic plays such a large part in the UK freight scene, this has a proportionate effect. “Intermodal maritime has the largest market share of freight moved, comprising 34.5 per cent in the latest quarter”, they say.

Construction volumes were 6.1 per cent lower this quarter compared with the same quarter the previous year. Rising costs and economic uncertainty have led to fewer building projects. The continued lower demand for concrete is also a reason for the reduction. However, flows of aggregates for the vast high speed rail project HS2 remain high, which lessened the overall decline. Construction had the second largest market share of freight moved, with a value of 30.9 per cent.