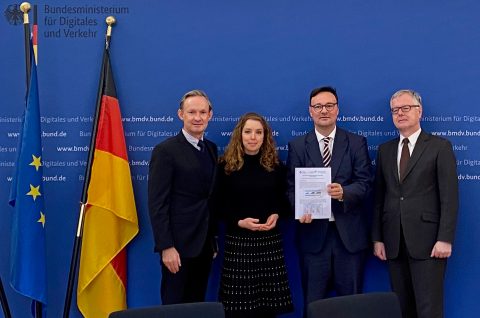 The three associations involved are the Allianz pro-Schiene, the Federal Association of Parcel and Express Logistics (BIEK), and the Association of German Transport Companies (VDV). The proposals were presented to the German Ministry of Transport, Oliver Luksic, on 22 November. The associations highlight the necessity of improving capacity in the corridors, accelerating rail infrastructure expansion, and upgrading the urban rail infrastructure.

In a position paper, the three associations listed the three most important rail corridors that need larger capacity for parcel deliveries. They are the lines connecting Nuremberg-Hannover, in the centre of the country, Stuttgart-Berlin, connecting the southwest with the northeast, and Hamburg-Munich crossing Germany from north to south. Moreover, the three parties are asking for these corridors to be provided with connections to the Rhineland/Ruhr area.

The associations are also asking for new hubs for rail-rail transhipments, such as the mega-hub Lehrte, near Hannover. “Such innovative hubs increase the performance of combined transport and enable new logistics concepts, including single wagon concepts”, they claimed. A denser terminal network, therefore, would ensure better connections and faster operations, increasing the attractiveness of rail.

Concerning sidings, the parties lamented that “loading companies have to do at least half of the siding themselves pay and decide on a proportionate subsidy for ten years in advance”. For these reasons, the three associations are asking for industrial and logistics locations to be equipped with railway sidings in advance. Technological developments were also included in the position paper, namely electronic booking systems and real-time tracking software.

The request has been justified by the fact that parcel shipments are increasing every year as a result of growing online trade, as the associations pointed out. Over the past 10 years, year-on-year shipment volume growth had ranged between 4 and 7 per cent. The associations are therefore open to exploring alternative routes and creating a system for varying deliveries of units with fluctuating quantities.

The growth saw an especially rise sharp in 2020, with shipping volumes increasing by a double-digit year-on-year rate for the first time in 20 years, as a BIEK study shows. Throughout that year, in fact, parcel shipments exceeded four billion shipments, reaching 4,5 billion in 2021. Shipping volumes are expected to increase by a year-on-year rate of another 8% each in 2021 and in 2022 and reach 5,7 billion shipments by 2025.

The Allianz pro Schiene (Pro Rail Alliance) unites 24 non-profit organizations and more than 150 railway sector companies, which aim at the promotion and improvement of rail traffic in Germany. The Federal Association of Parcel and Express Logistics (BIEK), was funded in 1982. In its function as a service provider, BIEK provides its member companies with information about current developments and trends. The Association of German Transport Companies (VDV) advises its member companies at regional and national level and offers a platform for the exchange of experience and know-how.