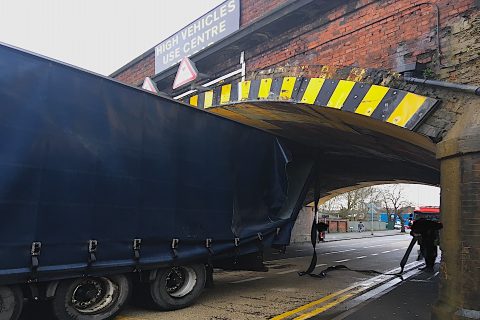 Published on 24-11-2022 at 06:00
Crash bash wallop. Another day, another truck wedged under Harlaxton Road Bridge at Grantham on the East Coast Main LineImage from Network Rail

Foster’s Bridge in Ketton finally got certified for traffic after being out of action for most of the month due to a particularly damaging bridge strike. After all, when half the structure comes crashing down around your ears, that’s pretty damaging. It might not be quite up there with the Ever Given grounding in the Suez, but the social and economic impact of that moment of inattention will be substantial and had everyone up the creek for three weeks.

Yet, statistics show that on the day the bridge will be given back to traffic, five more bridges on Britain’s railway network could potentially be hit by trucks resulting in delays or detours for passengers and freight operators. For the most part, these rapid unplanned disassemblies will go completely unnoticed by all but the most local news media. The irony of bridge bashing is that it’s so common these days it doesn’t even make the inside pages.

Wise Up, Size Up

The message “delayed due to bridge strike” is probably right up there in the unwelcome messages charts, alongside “insufficient funds to complete transaction” or “your call is important to us”. So why, then, are we tolerating a ridiculously high number of bridge bashings on Britain’s railways? The answer is: we’re not. It’s Network Rail’s number one pain in the abutments, and the infrastructure agency has been actively pursuing a campaign of awareness and attitude adjustment for years.

“Wise Up, Size Up” has been an ongoing campaign from Network Rail aimed at the road haulage industry since 2018. NR says it works with a number of railway industry partners to tackle bridge strikes, including Highways England, the Driver and Vehicle Standards Agency (DVSA) and those hauliers. While incidents have reduced in recent years, numbers have steadily started to creep up again. Between 1 April 2021 and 31 March 2022, there were 1,833 bridge strikes reported across the network. Most of the vehicles that hit railway bridges are Heavy Goods Vehicles (HGVs) and double-deck buses, which are very common in the UK. Seriously though, people have been killed in top deck strikes.

The true cost of bridge strikes

Harlaxton Road Bridge, just north of Grantham station on the East Coast Main Line, is a typical Victorian arch. Stout and unswerving, it’s built like a battleship, which is just as well. The poor old thing gets battered more than almost any other structure on the railway network. Last year the Lincolnshire landmark made its own mark on seventeen vehicles, the drivers of almost all of which had just exited the nearby A1 trunk route and sought to cut across the country to their destinations.

Network Rail says a bridge strike incident costs around 13,000 pounds (about 15,500 euros), adding up to around 23 million pounds (about 27,5 million euros) a year, met by the UK taxpayer. That, though, only covers the cost of engineering safety inspections. Incidents like Foster’s Bridge at Ketton bring that budget crashing down like a viaduct walloped by a fifty-tonner on a tight schedule. The true cost of bridge strikes is vastly more.

“Bridge strikes are a serious cause for concern”, says Paul Rutter, East Coast Route Director for Network Rail and winner once again of the railway industry understatement of the year award. “Not only do they result in unnecessary delays, cancellations and high costs, but they also pose serious safety issues for both road and rail users. With Black Friday and the Christmas delivery rush just around the corner, it is so important that both haulage operators and drivers plan ahead and take extra care. Lorry drivers should ensure that they have the height of their vehicle written down in clear view, look out for road signs and slow down when approaching a bridge.”

As well as the ‘Wise Up, Size Up’ campaign, Network Rail are working to ensure that haulage companies and their drivers are provided with all the tools and knowledge they need to avoid becoming bridge bashers. There is a team of bridge strike ‘champions’ located across the country who raise awareness of the issue by visiting haulage companies and leading in the management of bridge strike risk in their local area.

Meanwhile, Harlaxton Road Bridge is less than three weeks away from its next ‘scheduled’ bash.