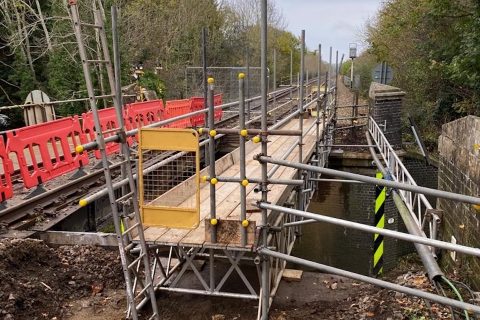 Services are due to resume in full this Wednesday 23 November, after a serious bridge strike by an oversized road vehicle required almost complete reinstatement. The strike, one of thousands each year on the British network, was the most serious of the year to date. During repairs, it has reduced the link between Oakham and the East Coast Main Line at Peterborough to a speed-restricted single track.

Freight services have been disrupted between east coast ports, including the intermodal hub at Felixstowe, and the major logistics centres in the English East Midlands. The brutal bridge bash at Ketton, a village in Rutland, England’s smallest county, left one half of the two track structure demolished, and the other track in need of engineering attention. Full services are about to be restored after an intensive operation to rebuild the structure.

Specialists from Network Rail, the infrastructure agency, were left amazed that the modest bridge had survived at all. The single span, over the Stamford Road in the village and locally known as Foster’s Bridge, was remarkably capable of carrying a limited service within a few days. Engineers began work almost immediately after a goods vehicle struck Foster’s Bridge on Saturday 5 November. Although passenger services have been cancelled during the works, some freight traffic was able to pass over a temporary bi-directional working on the single remaining track, while the wrecked span was replaced.

Aside from the impact on the bridge, the impact on schedules has been felt, both on the rails and the roads. Passenger rail services between Birmingham and Leicester, and between Peterborough, Cambridge and Stansted Airport, have all been affected. A severe ‘knock-on’ has brought the county town of Oakham to a standstill. The town has a series of very busy level crossings, and delays at them have been considerable at times. Last weekend was reportedly the worst, as essential works on the bridge forced road traffic to be diverted. Stamford Road in Ketton will not reopen until the end of this week.

The line is one of only two routes for freight traffic between the English Midlands and the port of Felixstowe. The alternative is a lengthy detour via London. Essential planned engineering work on the Crossrail route through London on this past weekend, meant that freight traffic was rerouted to travel via Oakham. The level crossing barriers in the town were down for much longer than usual. Such was the frequency of rail traffic, that some residents believed the road in their town had been permanently closed.

“This has been a massive piece of work for our teams and I am pleased that the line between Leicester and Peterborough will fully reopen [on] Wednesday”, said Gary Walsh, East Midlands Route Director for Network Rail. “The damage to the bridge at Ketton was substantial. Our teams have worked hard to carry out these repairs as quickly as possible and I’d like to thank the local community for their patience.”

Drivers intending to use road routes through Oakham were given advice to avoid the level crossings in the town wherever possible on Saturday just passed. There has been relief for rail companies too, with both freight and passenger operators expressing both relief and thanks. “We are looking forward to being able to run our services as normal again and are delighted with how efficient Network Rail have been to be able to reinstate services following the substantial impact the damage to the bridge has caused”, said John Robson, Regional Director East Midlands and East Anglia for CrossCountry, one of the passenger operators who rely on the route. “We would like to echo Network Rail thanks to the local community and our customers for their patience.”