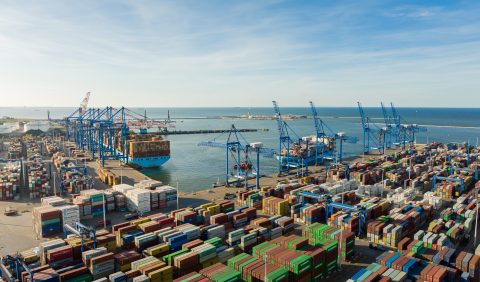 The Deepwater Container Terminal in Gdansk, in northern Poland, will from now on be known as the Baltic Hub. According to the company, the new name stands to signal the ambitions of the terminal to become the main hub in the Baltic region, both by sea and land.

The news coincides with the start of construction of the third deep-water quay (T3) at the terminal, which is expected to boost the capacity of the terminal. Once T3 is completed, the terminal will be able to handle the next generation of containerships arriving in the Baltic Sea.

The Baltic Hub and its third deep-sea quay

The Baltic Hub is owned by PSA International (40 per cent), Polish Development Fund (30 per cent), and IFM Global Infrastructure Fund advised by IFM Investors (30 per cent). The terminal has experienced growth since its opening, in 2007, under the name DCT Gdansk. It all started with one deep-water quay and a capacity of 500,000 TEUs. In 2021, the terminal was equipped with a second deep-water quay, which led to a fourfold increase in TEUs, reaching 2,09 millions.

The terminal functions as a transport gateway to Central and Eastern Europe, with inland destinations that include the Czech Republic, Slovakia, Hungary, and Germany. Currently, the Baltic Hub has 1,300 meters of quay, 14 Ship-to-Shore (STS) cranes, and an annual capacity of 2.7 million TEUs. However, the terminal will keep expanding with the construction of a third deep-water quay that started this month and will be ready by 2025.

The T3 project will include a deep-water quay of 717 metres in length, with depths alongside of 17.5 metres and a yard area of 36.5 hectares. Moreover, the investment will involve the purchase of 20 semi-automated Rail Mounted Gantry (RMG) cranes for the container yard. The new version of the hub is scheduled to open for operations by mid-2024 and be fully completed by the second quarter of 2025.

Sincere congratulations, to a clear signal, a needed – and a trustworthy!
When, with high cap., high qual., north – south railways, then, as well, high capacity, high qual. connections, between Hub and Med area, Trieste…, etc., etc.,… Simply, dynamic vitality will be added, to hemisphere, the since long requested, a win win!
In any case, new, needed redundancy, resilency and robustness will be added to Region!