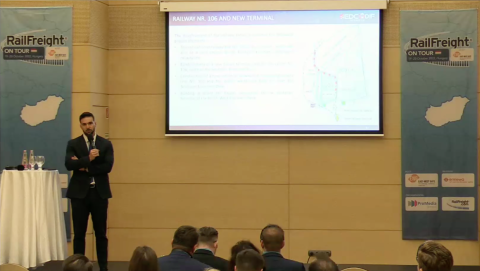 The opening of a manufacturing plant of CATL in Debrecen is considered a big deal, providing the region with an economic boost. What has convinced the Chinese battery maker to strike down in the eastern Hungarian city? We asked the Vice Mayor of Debrecen Lajos Barcsa at the RailFreight on Tour Summit, which was also held in the same city.

Lajos Barcsa was personally involved in the negotiations with the manufacturer, which produces batteries for electric vehicles. That this was a welcome deal goes without saying: the electric car market is growing and car manufacturers in Hungary and the rest of Europe are in need of the battery, with a short as possible supply chain. Hungary is developing as a hub for the automotive industry.

According to the vice mayor, the choice for Debrecen was based on the fact that it had already proven its worth with the creation of an industrial zone for BMW. “The northwestern industrial area did not exist ten years ago. It did not exist three years ago. We acquired the lands – 400 hectare – and provided all the necessary infrastructure, together with the state. “We have proven with BMW that what we promise we can deliver, in time and with quality.”

The city of Debrecen is planning to do the same for CATL, this time in the South Industrial Park. Situated south of Debrecen International Airport, new railway lines will be laid, a new terminal will be erected and warehouses will settle to make this area a major rail freight hub.

Railway line 106 will be relocated to serve the industrial park, the vice mayor explained. “There will be a new route, which is currently under discussion. We are analysing how this line could best be utilised from a logistics point of view.“

There will also be a new industrial railway line connecting railway line 106 and the public warehouse, and maybe later, also the CATL warehouse. And, a new transit terminal will be built next to railway line 106, south of the Southern Economic Zone, the vice mayor illustrated with a preliminary plan.

With this policy of providing all the needed conditions for an important company, the city is aiming to become a hub for the automotive industry. That this works out is evident from the earlier marriage with BMW, which is settled in the northwestern industrial park. Also here, it provided the needed infrastructure, with a focus on rail, and it is currently expanding this infrastructure.

“In the northwestern industrial park a new rail and a new truck park are being built. Both are planned to be delivered by the end of 2023”, said Barcsa. The rail terminal has four arrival and departure tracks and a total of seven loading tracks, of which four are equipped with two gantry-cranes. Two of these tracks are rented by BMW for its car loading.

These investments are coupled with a new BMW plant in the industrial zone. The new facility, which is worth 1 billion euros, will launch the series production of the fully electric Neue Klasse in 2025, which provides a further boost to the city as a hub for the electric car market.

Debrecen on the rail map

The industrial areas may be well connected with railway lines, but how well are they connected to the rest of Europe? This remains a critical question, as it depends on the infrastructure works of Hungary as a country. Currently, the most important project in this regard is the Budapest bypass line, also referred to as the V0 railway line. This is a new line that connects the east and west of Hungary via Kecskemét and Székesfehérvár, instead of Budapest.

The network around Budapest is currently the main bottleneck in the country. The railway lines are congested, and with more traffic coming from the east, this will only get worse. “Currently, traffic from the east to the west of the country can only pass through Budapest. About 80-90 per cent of all traffic is handled here”, explained Akos Ersek from the International Union for Road-Rail Combined Transport (UIRR). Therefore, the V0 railway line is a necessity, but there is no clarity on the progress.

Towards the east, there is a connection in the pipeline as well. The new railway line 106 in the southern industrial park will intersect with the new Budapest-Kolozsvár high-speed railway line”, said Barcsa. This line is to connect Budapest, and thus also Debrecen, with Romania. The existing line between Debrecen and the Romanian border city of Oradea will be electrified, as was recently agreed by the countries’ governments.

These developments clearly put the city on the map, concluded the vice mayor. “Debrecen was recently ranked 10th by the Financial Times as an attractive investment location. As the city of New York ranks 1st, this was somewhat shocking, but I am very proud that Debrecen is on this list, and I would like to invite people to connect to us if they see opportunities for cooperation”, he concluded.

The RailFreight Summit on Tour Hungary was held on 19 & 20 October 2022. The main aim of the summit was to connect Hungarian rail freight professionals with the international industry. Many new business relations were formed.