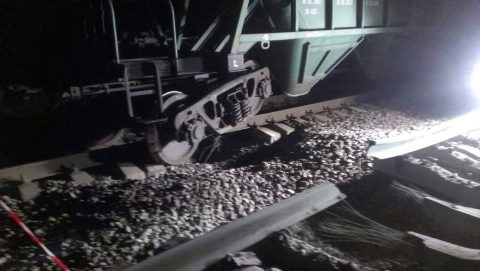 Who are these rail guerrillas that sabotage the tracks in Russia?

The explosion on the railways of Russia near the border with Belarus was claimed by the guerrilla group Stop the Wagons, and it was not their first act of resistance. Who are these ‘rail guerrillas’, and what is their aim?

On Monday 24 October a railway section near Novozybkov, close to the Russian borders with Belarus and Ukraine, was damaged by the deployment of explosive devices. The damaged tracks are part of an important line connecting Bryansk in Russia with Gomel in Belarus. And in general, Russia relies heavily on railways for the supply of military equipment and personnel.

‘If you block rail, you stop hostilities’

This has been well understood by Stop the Wagons. “The cheapest transportation of equipment, fuel and ammunition is by rail. If you block the railway communication or slow it down as much as possible, the hostilities will come to naught”, they write on their website. “By sabotaging the work of the railway, you are saving lives on both sides of the front.”

This is not just a war narrative, but it is actually what the group does. Seven months ago, when the war in Ukraine started, it decided to form resistance against the Russian aggression in Ukraine by sabotaging small sections of the railways. This includes destroying switches, tracks or blocking tracks for a short period of time.

Although these are ‘small acts’, they have a heavy impact, the group argues. “It turned out that stopping the war is quite within the power of ordinary people. Let it be for a couple of hours while the tracks are being repaired. But it is possible”, it writes on Telegram.

According to an update of the UK Defense Intelligence, the attack in Bryansk was at least the sixth act of sabotage of the group since June. Stop the Wagons does not confirm or deny, but comments: “Yes, the “incident” in Bryansk is only a small part of what we are doing to stop the war.

“Seven months ago we only took the first “steps”, often at random. We googled the methods used by our partisan ancestors during the Great Patriotic War. We spied on life hacks from Belarusian brothers. We were shaking with fear, expecting that somewhere we would probably ‘burn out’ and the FSB would come for us”, the group says on its Telegram page.

However, the latter did not happen. The website was hacked and social media sites were down, but only for a while. Their current website and telegram channel is up in the air, and they are posting regular updates. “They probably underestimated us”, they conclude on their channel.

The explosion in Bryansk is one of the larger incidents on the Russian railways. On 8 October, the Kerch bridge was bombed. This bridge connects the Crimean Peninsula with mainland Russia. Both its road and rail section ended up being damaged. Although traffic partly resumed the same day, the bridge is expected to be back in full operation by July 2023. Stop the Wagon remains ambiguous about their role in the attack.

1 comment op “Who are these rail guerrillas that sabotage the tracks in Russia?”

Good question!…
(Broken rails should not be, by far most frequent single cause of derailments – all over…)
Seriousely, just a minority is winner, at current railway standards, optimal, a century ago…
(In EU, in fact, now majority is targeted, imposed extras, advocated by shortcomings of railways – thus, decisively Goal of EU, nearness to Market, is obstructed – by Commission…)