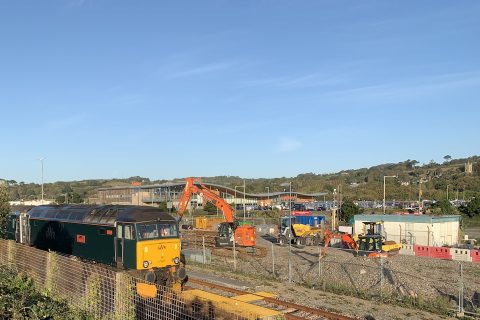 Penzance investment means all change at the end of the line

A multi-million-pound project is underway at Penzance, in the southwest of England. A new stabling and maintenance facility is under construction. When operational, it will allow longer passenger train formations to be serviced locally without a costly transfer to Plymouth, almost eighty miles (approximately 130km) to the east. The increased capacity offers the prospect for future freight operations.

The new, longer sidings will mean the passenger operator GWR will be better able to service and run longer, nine-carriage trains between London Paddington and Penzance. There is also the prospect of reintroduced freight operations, with on-board light logistics the most likely benefactors. One company, InterCity RailFreight, already transfers premium seafood from the region by using spare capacity on passenger trains. The fast-growing online logistics sector is well suited to the West Country, where road communications routes can be congested and time-consuming.

The new facility, nominated by Ponsandane Sidings, will be built to the west of the existing Long Rock Depot, which is around one mile from Penzance station. The development means Penzance will be able to accommodate longer trains by providing a dedicated place for the trains to be stored, cleaned and prepared before re-entering service.

Construction of the new sidings has been underway since Spring, and is expected to be completed within a year. Once complete, the new sidings will enable an increase in capacity near the depot, better allowing GWR to clean and maintain its fleet. The local authority claim the sidings will also support business, tourism and connectivity in Cornwall. The local authority is also sponsoring civic works on adjacent land.

“We are continuing our investment into the railway in Cornwall”, says Christian Irwin, Network Rail’s Industry Programme Director for the South West of England. “As the country looks to recover from the Covid pandemic, it has never been a more important time to invest in rail and ensure the railway is an efficient, affordable and reliable green transport option.”

Industrial past and industrial future

Penzance and the South West region do have an extensive industrial heritage, which relied heavily on the railways for its development. Agricultural produce and the fishing industries prospered on the back of fast logistics to markets in more populous regions. mining, mainly for tin, was also a benefactor. Possible future industrial development has been mooted, with commercially significant deposits of lithium in the region.

More immediately, the new sidings will provide for more efficient operations and make rolling stock more readily accessible for light logistics opportunities. This latest funding announcement is part of Network Rail’s ongoing investment into the railway in Cornwall. Other works include upgrades to passenger facilities in the region and collaboration with Network Rail to support plans for a proposed future Mid-Cornwall Metro, which is among the successful bids for the UK government’s fund to restore rail connections.

Maintenance, predictive, “optimal”…, etc., is big business – and mantra…
Simply, however, an optimal railway, now is the needed!
Stuck in standards, optimal when steam was shifted out, currently, devastatingly, railways is not optimal, neither for Industry, nor for clients.
Quality pays and at transports those devices, now handsomely rewarded are redundant, resilent and robust!…
(Causes of disturbings, frequent and costly maintenance of infrastructure…, decisively has to be outed!)