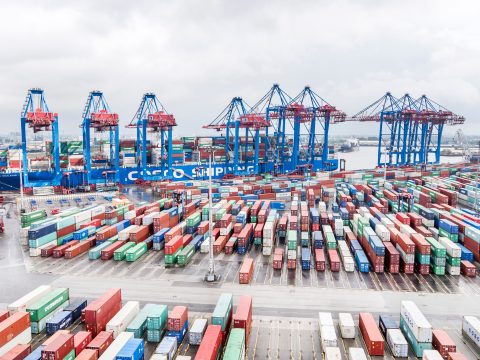 COSCO will not own the port of Hamburg, HHLA guarantees

COSCO is about to finalise the acquisition of 35 per cent shares of the Container Terminal Tollerort (CTT), managed by HHLA. This procedure has been worrying the German federal government, which is assessing whether COSCO’s participation in the CTT poses a national security risk. HHLA has reassured the public by stating that COSCO will not take over either the port of Hamburg or HHLA.

The German federal government is in the process of examining the agreement between COSCO and HHLA. The deadline is set for 31 October, date within which the German ministries have to make a decision. “The Federal Cabinet will only make a decision if it rejects the cooperation. In the case that no decision is made, we can implement the agreement with Cosco,” Hans-Jörg Heims, Head of Corporate Communications for HHLA told RailFreight.com.

Moreover, HHLA specified that the Chinese company will not gain access to strategic know-how. “The port infrastructure remains the property of the Free and Hanseatic City of Hamburg. IT and sales data remain the sole responsibility of HHLA,” the German company commented.

The EU approved the partnership and the benefits are many

When it comes to the CTT, HHLA specified that COSCO will not have exclusive rights or access, but the terminal will remain open for all customers. HHLA also clarified that the EU did not object to this cooperation, considering that antitrust approval was granted. “HHLA has not been given any objective reasons that would speak against approving the investment.”

HHLA has in fact highlighted some of the advantages that this partnership will bring. For example, cooperating with COSCO is likely to solidify the port of Hamburg as a logistics hub in the North and Baltic Sea regions. Moreover, HHLA claims that it “will strengthen supply chains, secure jobs, and promote value creation in Germany.”