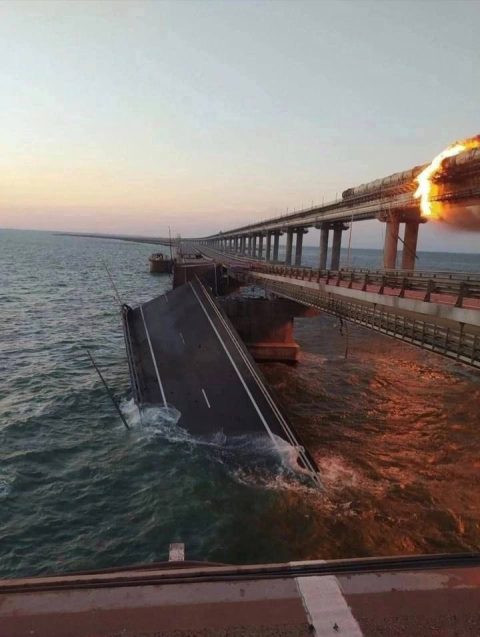 Aftermath of Kerch bridge: rail freight comes to the rescue, for now

While reparations are being carried out on the road section of the Kerch bridge in Crimea, traffic of goods on the bridge has been moved on the rail. As Russian Railways (RZD) posted on Telegram, the company is collaborating with the Crimea Railway for this temporary modal shift due to the impossibility of sending trucks across the Kerch Strait.

The Kerch bridge was bombed on 8 October, with both its road and rail sections ending up being damaged. Rail traffic on the bridge was reinstated on the same day, as Mikhail Mishustin, the Russian Prime Minister, said in a meeting with Russian deputy prime ministers. A document from the Russian government mentioned by Russian media says that the bridge is expected to be back in full operation by July 2023.

RZD claimed on Telegram that 2,8 tonnes of cement, previously delivered by truck, have been sent to Crimea by rail from Novorossiysk. An additional 4,6 tonnes of cement are currently being loaded and will be shipped to the peninsula soon. Moreover, RZD said that “the first wagon with spare parts has already been sent”, with shipments of food products, mostly sugar and vegetable oil, to follow.

RZD is using stations close to the bridge to organise this temporary shift. The reloading process from trucks to covered wagons is taking place at the Anapa station, roughly 100 kilometres from the bridge. RZD said that the Timashevskaya station, near the Georgian border, is also ready for the transhipment of goods into TEUs.