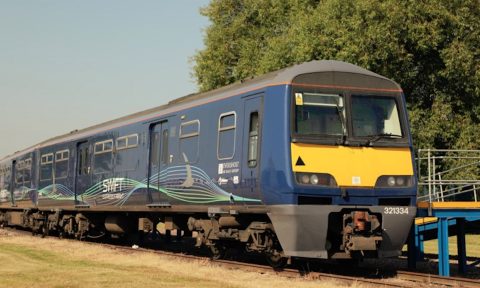 Doncaster-based Varamis Rail, which was finally granted a licence to operate just a few weeks ago, has wasted no time in leasing its first train, ready for express logistics operations. The start-up company has been planning its services for over two years. Now the company is on the verge of entering into a contract with a parcels company to deliver packages on its first route, between Birmingham and Scotland. The northern destination is likely to be between Motherwell and Glasgow, with Mossend International Railfreight Park the favourite.

Fully converted from passenger duties, Eversholt Rail is leasing a class 321 Swift Express Freight electric multiple unit to Varamis for their inaugural Birmingham – Scotland express logistics service. Eventually, Varamis Rail intend to deliver light goods at high speed across the UK. They have already unveiled plans for a circular service, broadly based on the East and West Coast Mina Lines. Initially, Varamis will be running a service five nights a week from Birmingham to Scotland for an undisclosed major parcel carrier.

Conversion work on the four-car set has been carried out by Gemini Rail Services at Wolverton, near Milton Keynes in Buckinghamshire. The class 321 Swift Express Freight provides all-electric traction, an absolute must for the environmentally friendly rail-based light logistics sector. “The class 321 Swift Express Freight ex-passenger trains have been repurposed for freight use with high capacity and 100mph services able to access rail terminals, ports and city centres across the rail network”, said Eversholt. Gemini has extensive experience of the class 321, having already worked on refurbishing over 120 cars for passenger use.

Eversholt Rail has committed to working with Gemini to convert a further four sets of class 321 EMUs. The work is due for completion by the end of 2022. “Negotiations continue with multiple operators regarding these trains, and leases will be agreed in the coming months”, claim Eversholt.

“The Team at Varamis are delighted to take delivery of the class 321 Swift Express”, said Phil Read, the managing director of Varamis Rail. “As a new train operating company, I would like to thank Eversholt Rail for supporting Varamis to become the UK’s newest and greenest Train Operator.”

As well as refitting to carry light logistics securely, the trains have had an extensive technical upgrade. Built in the late eighties, they’ve been updated with new traction and braking systems. “We are delighted to have secured this contract for new and modern traction equipment for the class 321 fleet”, said a statement from Gemini. “Newly fitted traction equipment and integrated braking enhancements deliver a highly reliable and greatly improved performance level for these trains in future years.”

“We are delighted to be working in partnership with Varamis”, said Paul Sutherland, Client Services Director at Eversholt Rail. “We share a vision to decarbonise the transportation of goods, encouraging modal shift from road to rail whilst contributing towards the UK Government’s ambition to decarbonise the rail sector by 2050.”