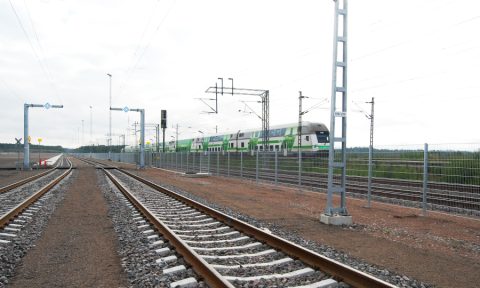 The Kouvola Rail and Road Terminal, Finland’s first dry port covering a 42-hectares area, is nearing completion. The site will commence operations in early 2023, while companies can already examine business possibilities in the large logistics area surrounding it. The new intermodal hub will be one of the westernmost broad gauge terminals, with the longest tracks in Finland, reaching up to 1,1000 metres in length.

The new terminal’s highlights will be the two loading rail tracks operating in broad gauge. Apart from being the longest in Finland, with an axle weight of 25 tons, the tracks are also suitable for electric locomotives, while they facilitate the loading of trains without the need to split them.

More importantly, Kouvola RRT is part of the development of the Trans-European TEN-T core transport network, and it is the only railway and road terminal in Finland belonging to the network.

“In the coming years, train traffic will increase. It creates demand for more efficient rail infrastructure. Train sizes are increasing, and new terminal solutions are needed to handle long trains. This need can now be met in Kouvola,” said project manager Tero Valtonen.

Apart from being an intermodal terminal which focuses on the green combination of rail and road transport while providing infrastructure for reduced carbon emissions by facilitating the use of electric locomotives, Kouvola RRT kept sustainability in mind also during the construction phase. “Sustainability has been considered, for example, in material selection, logistics during construction, and protecting the area’s natural environment,” explained the company.

That being said, Kouvola RRT can be proud of using recycled concrete and asphalt to construct road infrastructure in and around the terminal. At the same time, all aggregate needed for the works was obtained from the construction site itself, while logistics and transport distances were minimised as much as possible. For instance, the asphalt plant supplying the terminal was established very close to it.

Kouvola’s logistical significance is uncontested. For instance, in 2020, it was voted one of the best European logistics centres. “Indeed, the road and railway networks are united in Kouvola: the city has rail connections in all directions and main road network connections in six directions. Kouvola is the most central place in Finland regarding rail transport and a thoroughfare for freight traffic, making it comparable to Finland’s major ports and airports — Vuosaari, HaminaKotka, Turku and Naantali — and to the airports of Helsinki and Turku,” said the terminal’s representatives.

Additionally, it is home to the Tehola logistics area, which makes the location ideal for enhancing flows between Scandinavia, the Baltics and hinterland Europe while also providing the needed space for companies that would like to establish their business in the area. “New business plots are available from early 2023 near the terminal, especially suitable for operations requiring much space. The area can serve both logistics companies and other operators that rely on logistics, such as engineering or prefabrication companies,” concluded the terminal’s spokespersons.