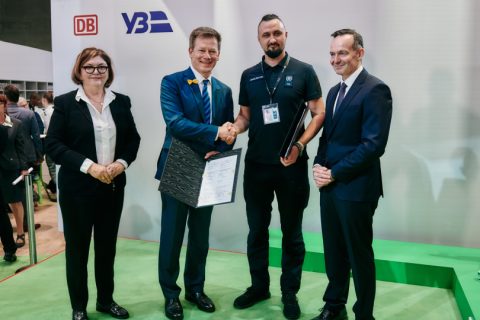 DB pledges support to Ukrainian Railways restoration, how will it work?

Deutsche Bahn and Ukrainian Railways signed an MoU which ensures that the German company will support their Ukrainian counterparts in post-war restoration. DB will assist UZ materially by providing needed equipment and on an advisory and managerial level to help it navigate possible financing sources.

It is important to mention that the two partners are not new to each other. The companies have been working together even before the war, while Ukraine was in the process of modernising and reforming its rail sector. As a result, the synergy was already there but will now intensify.

The partners will mainly focus on developing freight transport to and from Ukraine and guaranteeing that grain volumes will keep finding their way out of the war-torn country. That being said, DB wants to examine the launching of new rail corridors and transhipment terminals or the optimisation of existing ones. Yet there is no concrete approach or study on how these plans will be implemented.

Another interesting point of the DB-UZ partnership is the consultation the first will offer to the second to secure financial support. Specifically, “DB will continue to help establish corporate structures at UZ, which, among other things, are a prerequisite for receiving financial aid for reconstruction,” said the German company adding that spare parts and wagon materials are also in their plans.

Returning to the strategy of boosting rail and grain transport to and from Ukraine, DB’s approach leaves some space for critique. The German company mentioned that it examines the use of Ukrainian equipment to keep exporting grain. “To increase grain exports to the European Union [..], hopper wagons can accommodate significantly higher quantities than containers,” said the company. Yet, this approach might prove problematic.

As Marcin Witczak from Laude Intermodal mentioned a few days earlier during the RailFreight Summit Poland 2022, the hopper wagons that DB wants to use constitute one of the main capacity and speed restrictions on grain exports by rail. “When using open/hopper wagons, it takes 24 hours to reload a train. However, platforms with containers reduce reloading to two to four hours per train,” he had said. He also stressed that one of the best approaches to assist Ukraine with exporting grain was to containerise cargo. “Support means nothing without sending containers and compatible equipment to Ukraine,” he underlined.

Whether DB and UZ will stick to hopper wagons or change their approach is unknown. However, this is some food for thought for the two partners, who otherwise seem to have a very noble plan of restoring transport in Ukraine.