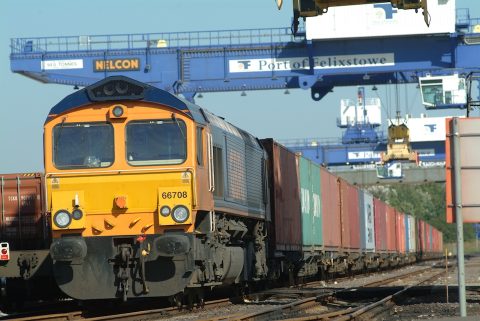 The Port of Felixstowe, Britain’s busiest intermodal terminal, is about to dive into a second wave of industrial action. The tide turned after the trades union Unite unilaterally rejected an imposed pay deal. Although the action was announced during the period of national mourning for the late Queen Elizabeth, workers will not withdraw their labour until the end of the month.

The east coast port, that handles more containers by sea than any other port, and more containers by rail than any other terminal, is set to tie up all shoreside activity from the morning of 27 September for a period of nine days, until the morning of 5 October. The strike action will coincide with a two-week walkout by workers at the port of Liverpool, from 19 September to 3 October, also in a row over pay. Controversially, the Liverpool strike begins on the day of the Queen’s funeral.

An imposed pay settlement of around seven per cent has failed to placate workers at Felixstowe. In an overwhelming ballot, the move was roundly rejected by the 1900 workers at the Hutchison-owned complex on the east coast of England. Across the country, at Peel Ports operated Liverpool, around 560 workers will also walk out at around the same time. Liverpool also depends on a degree of rail freight for operations.

Both ports are already deep into their Christmas cycle and consumer goods destined for the store shelves of the UK may well be further delayed. The strikes follow on from an earlier stoppage at Felixstowe. Every day Felixstowe handles over seventy intermodal train movements, delivering to all parts of England, Scotland and Wales. Liverpool is not quite as busy, but recently benefitted from capacity enhancement works, making it a more attractive rail freight terminal.

According to the union, the port management at Felixstowe unilaterally ended pay talks after refusing to improve its pay offer and instead announced that it was imposing a pay deal of seven per cent on the workforce. The imposed pay deal is, according to Unite, actually a sizeable pay cut with the current real inflation rate (RPI) standing at 12.3 per cent. That calculation is however contested by the government’s preferred measure, the Consumer Prices Index (CPI) which was calculated at 9.9 per cent by the Office of National Statistics.

Rejecting the claims of the union, the port management have issued a short statement. “We are very disappointed that Unite has announced this further strike action at this time”, they say. “The collective bargaining process has been exhausted and there is no prospect of agreement being reached with the union. The port is in the process of implementing the 2022 pay award of 7 per cent plus 500 pounds (555 euro) which is backdated to 1 January 2022.”

Peel Ports has been more expansive in its response. They say Unite has confirmed strike action is to take place at the Port of Liverpool between 06:00 Monday 19 September and 06:00 Monday 3 October. The port operators claim the strike move is designed to disrupt operations at the UK container port after a pay package of 8.3 per cent was rejected by the union, and following demands for greater pay increases. “Despite a series of meetings, we are very disappointed Unite the Union has confirmed strike action by its Port of Liverpool Containers’ members”, said David Huck, the chief operating officer at Peel Ports Group.

Huck has claimed that the offer made to workers at Liverpool is above the national average pay settlement, despite what he claims is a stagnation in the global container market – although there is evidence that the value of the market has increased considerably due to supply chain disruptions. “We will continue to urge Unite to keep talking with us so together we can find a resolution to avoid action that will be bad news for the sector, businesses and families, with the effects being felt for many months to come, at a time when container volume demand has started to reduce”, he said.

Rail freight continues to be a bystander in these maritime disputes. A position of neutrality which has done little to mitigate disruption due to the multiple disputes affecting passenger train operations and Network Rail. In a robust closing statement from Peel Ports, Huck hinted at a retribution from the port operation. “We have over applicants on file awaiting recruitment opportunities at the Port of Liverpool”, he said.