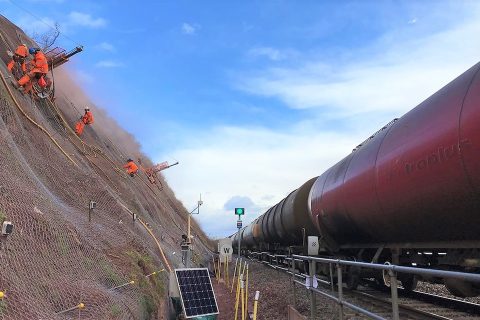 The landslip plagued Newport to Gloucester railway line has reopened to freight and passenger traffic, after a major cliffside resilience project. The first phase of upgrading the line has seen the steep riverside embankment between Lydney and Gloucester reinforced with modern stabilisation techniques.

Network Rail has embarked on a twenty-five million pound (29.75 million euro) programme of work to stabilise a landslip prone cliff above the railway alongside to the Severn Estuary. The first phase of the intensive work began on Monday 18 July, with specialist teams working round the clock, during a planned seven-week closure of the line between Lydney and Gloucester. That phase is complete and traffic has now resumed. First trains ran on Saturday 3 September.

The national infrastructure agency, Network Rail, has released aerial footage of the works undertaken.The images record the scale of the cliffside resilience project as Newport to Gloucester railway line reopens. More frequent extreme weather saw this section of railway devastated by five major landslips between 2020 and 2021. This had led to extended closures of the railway and temporary speed restrictions. According to Network Rail, these events combined in delaying more than 200,000 trains.

With the long-term viability of this vital passenger and freight line at stake, Network Rail engineers developed a multi-million-pound plan to the protect the railway for generations to come. The sweeping aerial footage shows the plan in action, with more than 15,000 tonnes of material removed by excavator from the steep face of the cutting on a three-mile stretch near Lydney and taken away by train for recycling.

The line had already been protected by steel mesh, laid over the steep cutting. The original profile of the earthworks dated back over a century. The profile is typical of the standards accepted when the early rial network was developing, and commercial concerns encouraged develpoers to buy as little land as possible for their lines, resulting in many steep embankments and cuttings, which persist to this day across the UK network.

Maintaining and upgrading these earthworks is a major civil engineering challenge for Network Rail. The line between Newport and Gloucester, which connects South Wales and the English West Midlands, has been targeted for attention, such is its strategic importance to traffic between two economically growing regions.

Following the removal of the existing mesh, rope teams then moved onto the slope to install erosion control matting, using 27,000 square metres of new mesh, secured by more than 1,000 soil nails, drilled to a depth of ten metres. More than 700 staff from Network Rail and their specialist contractors, Taziker, worked just over 60,000 hours across the seven weeks, including during the two recent summer heatwaves – where temperatures on site often exceeded 35 degrees.

“I would, firstly, like to thank the local community for their patience while we’ve carried out the first phase of this vital work here on the Severn Estuary”, said Nick Millington, interim route director at Network Rail Wales and Borders . “I also want to thank our teams who have safely worked around the clock in challenging, dusty conditions, during the hottest summer on record. We are committed, through projects like this, to making our railway more resilient to the effects of climate change, so we can continue to deliver low carbon, safe and efficient travel for our passengers and freight partners.”