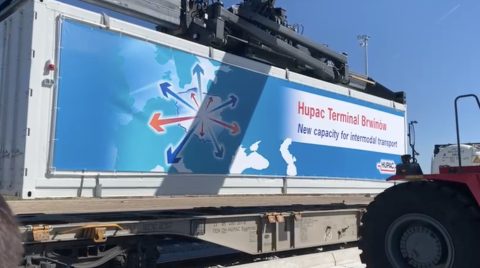 Hupac inaugurated its new terminal in Brwinów, just outside Warsaw in Poland on the morning of 7 September. The Inauguration took place during the RailFreight Summit Poland 2022, taking place in Warsaw on 7 and 8 September. During the ceremony, Siemens Mobility also presented the new features of the Vectron locomotives for freight transport.

The latest terminal of Hupac commenced construction in Spring 2021. After the official opening, it still takes a few weeks before trains can run through the facility. Handover to operations is scheduled for Q4 2022, said the intermodal operator.

Check the inauguration ceremony below:

The Brwinów terminal is located 15 km southwest of Warsaw. It extends on an area of 14 hectares and provides a capacity of up to 180,000 intermodal units per year in phase II. The facility offers rail/road transhipment as well as additional services for intermodal units.

The new transhipment terminal will allow for the consolidation of trains to Russia and China carrying goods from all over Europe. Many intermodal trains depart to Asia from central Poland, and many trains return through the popular border crossing between Belarus and Russia. The operator will be able to handle 740 metre-long trains on four transhipment tracks at this centrally located facility.

The inauguration of Hupac’s new terminal occupied the morning of the first day of RailFreight Summit Poland 2022. Now that the ceremony is over, the annual event is ready to kick off with its first sessions at 13:00 CET on 7 September. If you are a latecomer but still want to follow the event, you can do it online here.